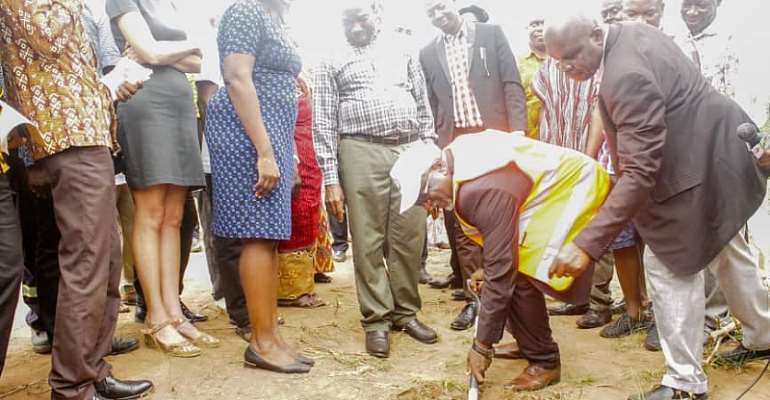 As part of Government’s One District One Factory Project promised to the Ghanaians, the Eastern Regional Minister, Eric Kwakye Dafour together with the Netherlands Government have cut sod for the construction of Compost and Briquette plants for farmers in the Yilo Krobo Municipal Assembly.

The project which is private partnership from the Netherlands government and Jekora Ventures Limited seeks to reduce the burden of farmers as well as create employment for the youth thereby reducing the high rate of unemployment in the Municipality.

Addressing the gathering, Hon. Dafour said “I am happy to join you cut sod for this important project in the Yilo-Krobo Municipal Assembly. We wish to thank International Volta and Jekora Ventures for this invitation and I believe, it will go a long way to support developments not only in the municipality but the entire region. There are 33 Municipal and District Assemblies here and we want to thank the Netherlands Enterprise Agency and other partners who have supported financial in this project.”

Government in 2016 promised Ghanaians of One District One Factory during its campaign ahead of the then general elections. After winning power, many were of the view that this dream will not leave to see the light of day but the Akufo-Addo led Government assured Ghanaians of delivering on its promises. The people of Yilo-Krobo in the Eastern Region were full of praises at the sod-cutting ceremony of the project.

The Regional Minister added that the construction will create job opportunity for the unemployed youth in the Municipality.

He said “Job creation is another important benefit from this project. The opportunity will be created for the youth to gain direct and indirectly which will reduce the number of unemployment in the municipality.”

Hon. Dafour further cautioned the Municipal Assembly to ensure that the land was fully documented.

“I am happy the municipal chief executive and his able staffs have been able to secure this land and my concern is its genuineness but he has assured me that this is proper documentation because lately, encroachment to government properties especially lands are becoming embarrassing so if u get this land and u are not able to properly secure it, by documentation, then as we move forward and the future is brighter, that is where u will find some families and people coming in saying we didn’t give u our property among others. Ensure to secure it so that the partners who have come on board to provide financing and engineering and the management of this project.” he recalled.

He, however, added that since Agriculture was the main source of livelihood for the populace in the Assembly, he is confident; all will come on board the project.

He said “My little knowledge on the establishment of this project is that, it will make good use of the waste production of organic fertilizer produced by our farmers. I am also told that the presence of the plant here to Somanya will also make good use of the waste of rice and maize husks. This is a commendable project because waste products which continue to create environmental challenges perhaps due our lack of knowledge will be recycled for good use. It is also a fact that Agriculture is a major economic activity in the Yilo-Krobo community. Most of the populace is involved in it. Our farmers also rely heavily on the use of fertilizers to roll their crops. You know that our land tenor system does not allow lying fallow for a long time leaving fertilizer application as the last resort. Therefore if one wants a good yield, then use fertilizer. Our Municipality, benefiting from such a reproduce, such a factory then this can tell that our farmers are going to make good of the fertilizer that is going to be derived.”

Municipal Chief Executive (MCE) at the Yilo Krobo Municipal Assembly, Ebenezer Tetteh Kupualor lauded the project adding that if the constituents inculcate good behaviours, the issue of sanitation 23 District Assemblies have been battling will soon be a thing of the past.

Deputy Netherlands Ambassador to Ghana, Ms Katja Lasseur was confident the farmers will make good of the project when completed to enhance their livelihood.

She also promised her country’s commitment and support in making Yilo Krobo a Municipal worth living in.