Eye on France: What the Boris is Johnson up to? 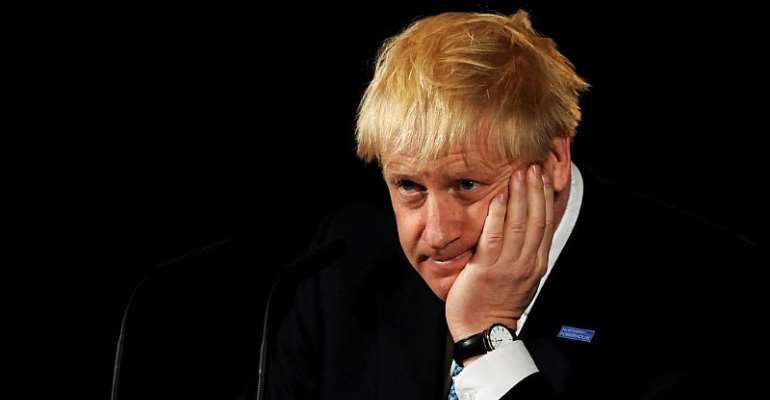 There's no getting away from Boris Johnson or Brexit. The papers in France and the UK are divided on the legality, legitimacy and logic of the British PM's latest move in dissolving the mother of all parliaments. But nobody's ignoring him.

Business paper Les Echos speaks of “Johnson's high-risk strategy”, suggesting that the UK prime minister could lose a confidence vote, and his job, as early as next week.

With more than a hint of irony, left-leaning Libération says “Johnson takes his time”, a reference to the fact he wants to close down parliament for the next five weeks.

This sort of suspension normally lasts just the few symbolic hours before the Queen's annual address. Five weeks is unheard of, especially with a crucial debate ablaze on the terms under which the UK will leave Europe.

Right-wing Le Figaro says the suspension of parliament has provoked “a wave of indignation”. But a separate article in the same paper describes the prime minister's move as “a master stroke”.

Le Monde looks to Brussels with the observation that, if there was ever any doubt about Boris Johnson's determination to blunder out of Europe without a deal, the answer is now clear.

What is marginally less so is the man's ultimate strategy, given that Europe has already told him to take a hike on his hopes for a renegotiated exit deal. How leaving the Palace of Westminster in smoking ruins will help to put manners on Europe is not instantly obvious.

“Dark day for democracy” laments the front page of The Scotsman. Fellow Scots at The National bluntly call Johnson “a dictator”.

The Telegraph is, needless to remark, enthusiastic. The Telegraph actually pays Johnson to write a column, so they want no talk of coups or undemocratic acts. The paper salutes the prime minister's "audacious effort" to “give effect to the will of the nation”.

The Daily Express and Daily Mail, also far out in the ranks of the isolationist right, are delighted that Blessed Boris has put on the boxing gloves and shown the courage to flush out those MPs who want to hamper Brexit.

The Guardian says this prime minister is ready to destroy anything that threatens his ambition. The main headline reads “Outrage as Johnson suspends parliament”.

And the Financial Times sums it all up in two lines: “Uproar as Johnson shuts down parliament to protect Brexit plan”.

A man of many faces
Le Monde's editorial has a scary opening sentence. “There are several Boris Johnsons,” we read. And then they give a list.

“Pure product of the British élite.” OK, we can buy that.

“Buffoon.” Who's arguing?
“He's a liar,” says Le Monde – that claim based on Johnson's fake-filled Brexit campaign in 2016.

He is capable of statesmanship and courtesy.
But basically he's a populist rabble-rouser, cynical and brutal, who will stop at nothing.

He has promised to get the United Kingdom out of the European Union, whatever the cost. Le Monde remarks that, in the uncertain wake of this latest elephantine explosion, the final bill could include the collapse of democratic rule in the UK.

Given the way the Scots and Northern Irish are reacting, it could well be the end of the United Kingdom.

It's a dangerous game, warns Le Monde. Boris reckons he can lose a motion of no-confidence next week, refuse to resign, dissolve parliament and then win a post-Brexit election. He may be right.

But he'll then have to launch an endless series of talks with the former European partners to ensure that everyday life, and business, can continue in the absence of community rules.

And if, as he has already threatened, Boris refuses to pay the 49 billion euros owed by London to Brussels, then those talks might not take place at all.

Left-leaning Libération says what Johnson has done is legal, but not necessarily legitimate.

A majority of British voters were in favour of Brexit, says Libé. But how many would have voted for the hard exit which now seems inevitable?

The French daily paper says that it is clear that Johnson's point of view is shared by only a minority.

And that's the great thing about populism. When the people think the way you do, they are the pillars of democracy. When they have the blind cheek to think for themselves, you close down parliament. And do what you want anyway.