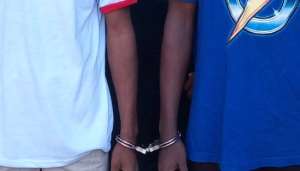 Six persons have been picked up by the Wenchi Police Command in the Bono Region for allegedly kidnapping a traditional priest from Badu in the Tain District.

The priest, was rescued unhurt by a police patrol team.

The six suspects are being kept in police custody to assist in investigations.

ACP Atsu Wemega, the Wenchi Divisional Police Commander in an interview with Citi News said the patrol team received information that a vehicle refused to stop at a police barrier at Akrobe and so it was on the lookout for the vehicle to ascertain why it did not stop at the barrier as directed.

“They were looking out for the vehicle until they got the vehicle around Koase when going to Nkosia. So they intercepted the car and found six people on board with the fetish priest so they tried to find out where they were going to but the response they had was not convincing so they brought them to the police station.”

“So it was at the police that they realised that an information had come from Badu concerning the kidnapping.”

ACP Wemegah also disclosed that they have started their interrogation into the incident.