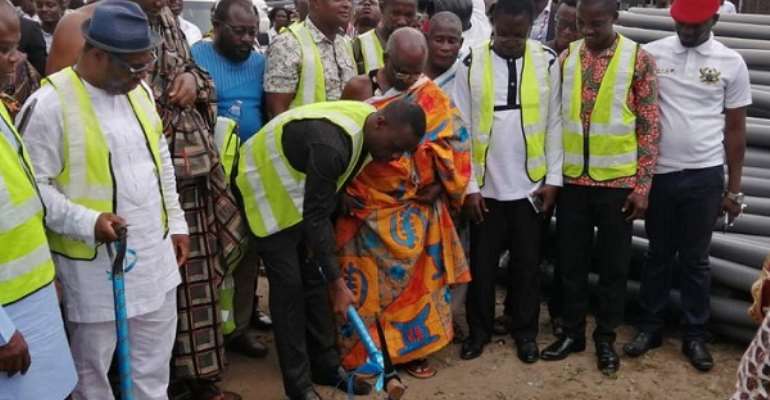 The Western Regional Minister, Kwabena Okyere Darko-Mensah, has noted that the Regional Coordinating Council was poised to provide a permanent solution to the water problem in Supomu Dunkwa in the Shama District of the region.

He mentioned that improving water services and uses, was essential for increasing hygiene and sanitation service levels that affected productive lives of people.

The Regional Minister stated this when he cut the sod for the extension of water supply from Ghana Water Company Limited (GWCL) at Daboase to Supomu Dunkwa.

He pointed out that when the extension work was completed, it would improve the local economic and social well being of the people in the area.

He added that safe and affordable drinking water for all required that there should be an investment in the appropriate infrastructure to ensure water accessibility to all.

“Ghana has since the mid 1990s been implementing string of reforms in the water sector aimed at enhancing the efficiency of the production and utilization of water,” he stressed.

He noted that although the Western Region was considered to be one of the wet areas of the country, current figures put it at the lowest rank on the ladder in terms of rural potable water coverage with just 44.20 per cent.

He attributed it partly to the difficult terrain in the region, which made access to many of the rural communities difficult and which had consistently resulted in low investment in rural water and sanitation.

The Member of Parliament for the area, Ato Panford indicated that the extension of water to Supomu Dunkwa was one of his campaign promises and was happy that it was being fulfilled.

He called on the residents to give the contractor all the requisite support to ensure that the project was completed on schedule.

Ho West Tension: Killer Reports Himself To Police
10 hours ago