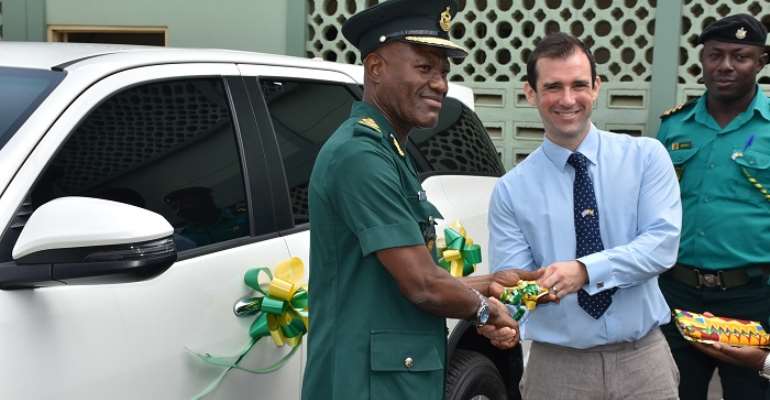 The mission's representative presenting the ignition key to the CGI

The vehicle was handed over to the GIS by the Regional Capacity Building Manager, Mr. Alistair Rushton, on behalf of the mission at the GIS National Headquarters in Accra yesterday.

Other items that were also donated to the GIS included specialized laptops, fraud detection equipment, batons and handcuffs.

Speaking at the ceremony, Mr. Rushton expressed the delight for the BHC to support and contribute in building the capacity of officers of GIS, in intelligence gathering and investigations, targeted at fake travel documents, illegal acquisition of visas, human smuggling and trafficking, and activities of organised crime group.

He noted that the BHC has over the years organised capacity programmes for officers of the GIS. “Recently, eight Officers have been trained to investigate organised crime,” he added.

Mr. Rushton who was accompanied by Emma Hardy, First Secretary and Regional Manager of Africa for Immigration Enforcement International, indicated that he was happy about the set skills that had been acquired by the Officers to combat organised crime. “The Officers are highly skilled and very friendly, they can function and relate well with other sister security agencies, and I urge them to share intelligence with sister security agencies,” he said.

On his part, the Comptroller-General of Immigration (CGI), Mr. Kwame Asuah Takyi expressed his appreciation to the BHC for the kind gesture and for building the capacity of officers for the specialized unit.

He said the service was making strides in building the capacity of officers and equipping them with the necessary tools and logistics in the fight against organised crime.

The CGI indicated that it has improved on work efficiency and enhanced the image of the Service as well.

Mr. Takyi explained, that recent developments on migration have made it a focal point of every country, which he said required to be managed effectively to curb crimes. “One aspect of managing migration effectively, is training and continuous capacity building of our Officers,” he added.