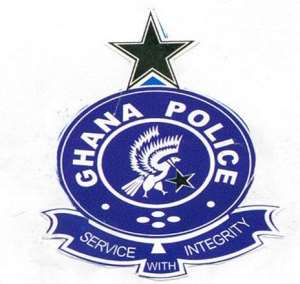 The deceased police officer, Lance Corporal Alhassan Asare who was found dead under mysterious circumstance at Akyem Swedru on guard duty in the Eastern Region has been laid to rest at Asante Mampong in the Ashanti Region.

The funeral of the late officer which took place on Tuesday August 27 2019 was attended by family and sympathizers that included top hierarchy of the Ghana Police service.

L/Cpl. Asare was found dead in a pool of blood with his service rifle – an AK 47 positioned between his thighs while his lifeless body laid in a plastic chair at his duty post; Dukes Petrol Filling Station, on Monday August 19, 2019.

Aftermath of the incident was characterized by speculations that hinted at the policeman being killed by unknown gunmen who deliberately left the weapon of the victim behind at the post.

Others believed that L/Cpl. Asare died as a result of an accidental discharge from his firearm.

Continuing, he said the police officer was found dead in a sitting posture with severe wounds to the head and bloodstains on his body and on the floor, with the rifle placed in between his thighs and pointing towards his head.

He explained that three empty gun shells were found lying on the floor beside him.

The PRO's story was based on a certain L/Cpl. Eugene Songoti Abaah who made a call to Akim-Swedru to report what he had seen upon reaching the scene.

He was there to check on the officer but found him rather dead in the plastic chair, having suffered severe gunshot wounds on his head, with his uniform soaked in blood.