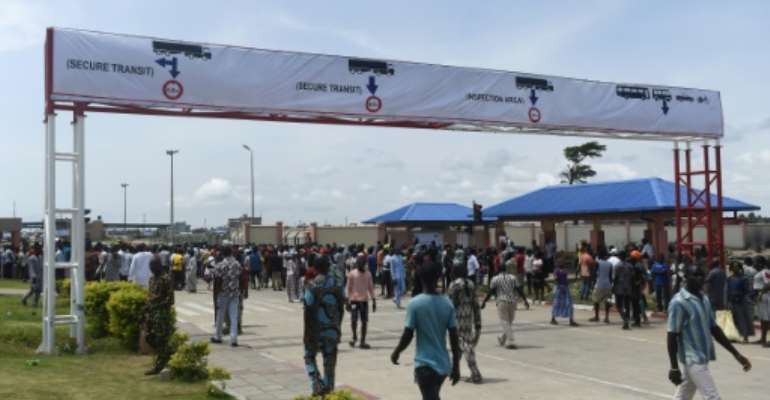 A spokesman for Nigeria's customs service said there was "tighter screening" at the border but people could still cross it. By PIUS UTOMI EKPEI (AFP/File)

Nigeria has announced the "partial closure" of its border with Benin to clamp down on the smuggling of goods, above all rice, into the country.

The West African powerhouse is targeting "massive smuggling activities, especially of rice, taking place on that corridor", the presidency said in a statement Wednesday.

Nigeria is heavily reliant on imports to feed its booming population, while the government is seeking to bolster agriculture as it looks to diversify the oil-dependent economy.

The authorities are looking to stem the inflow of key produce with restrictions such as curbs on importers' access to foreign exchange.

Such measures have helped push up prices, creating an incentive for smuggling from neighbouring countries.

The statement by President Muhammadu Buhari's office did not indicate when the latest measures took effect and what the "partial closure" entails.

It said the measure would "allow Nigeria's security forces to develop a strategy" to combat smuggling, which it called a "dangerous trend".

It said Buhari discussed the issue with his counterpart from Benin, Patrice Talon, at a summit in Japan and "would reconsider reopening in the not-too-distant future."

Nigeria's neighbour Niger, north of Benin, will be included in a later meeting, the statement said.

A spokesman for Nigeria's customs service, Joseph Attah, told AFP on Thursday there was "tighter screening" at the border but insisted people could still cross it.

Nigerian media have reported delays and restrictions at the border since last week.