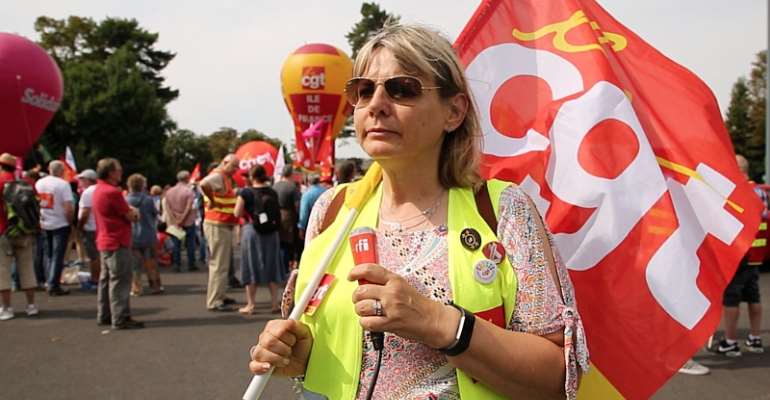 Trade unionists protesting outside a meeting of France's biggest network of entrepreneurs have warned that proposed pension reforms will hurt all workers, especially women and the most precarious.

Around a hundred and fifty trade unionists holding red flags and big balloons turned up on Wednesday outside the Longchamps racecourse in Paris to voice concerns ahead of a two-day annual summit of the Medef, the organisation representing French bosses.

“Medef's programme, which is extensively carried out by the government, attacks all rights: the rights of workers and the unemployed," said Jacques Borenstein, of the Force Ouvrière union.

The unions' main concern is the pension system reform that resident Emmanuel Macron plans to introduce in September.

"It will completely destroy all pension systems, in both the private and public sectors. Everyone will lose,” Borenstein told RFI.

Age vs contributions
The Medef supports raising the legal retirement age from 62 years to 64, a measure rejected by the unions, and initially backed by Macron. In an interview on Monday, Macron said he would rather base pensions on "the contribution period," or the number of years worked, "rather than on age".

As it stands, in order to earn a full pension, French workers must contribute to a pension fund for at least 41 years and three months.

Macron's change of heart did not convince business leaders, who say that raising the retirement age is the best solution.

“We are convinced, and experience demonstrates it, that it is the most efficient way to fix financing issues," Medef president Geoffroy Roux de Bézieux told RFI, adding that the presidential shift was a tactic to win back voter support ahead of upcoming local elections.

For the unions, basing pensions on contributions instead of age would have the same result: everyone would have to work longer.

“It's what we call the 'dead man's pension'," said Borenstein. "It's like a greyhound race: the closer the other dogs are, the more the greyhound runs away, and in the end there are no full rate pensions.”

Extending contribution periods, or increasing age limits, will hit the most vulnerable, according to Isabelle Bigand, of the CGT, France's largest union.

Women in the crosshairs
“It will weaken the most precarious people, exacerbate problems for women," she told RFI. Women who go on maternity leave will necessarily have to work longer, for example.

She is also concerned about the young: “Young people arrive on the job market at 25 or 26 years old. How will they stop working at 65 or 66? They will not, they will be exploited."

Talks between the government and trade unions about reforming the pension system will take place early in September.

The reform may spark protests as happened in 2012 when then president Nicolas Sarkozy's government pushed back the legal age of retirement from 60 to 62 years.

At Wednesday's s protests, unionists were already planning marches for next month.