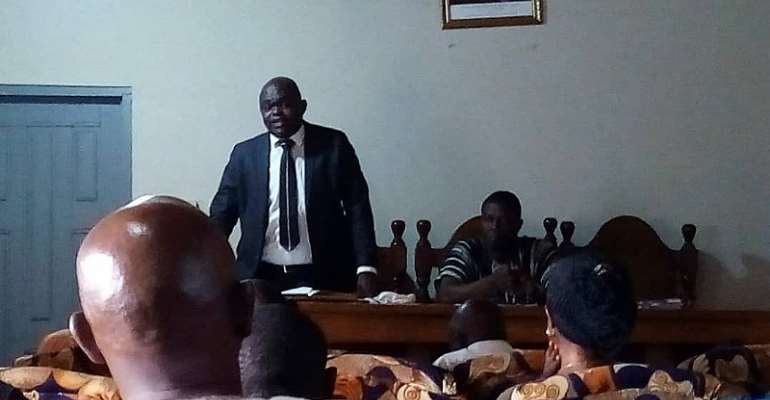 Dormaa East District Assembly has held its Second Ordinary Assembly Meeting with a call on the District Revenue Head, Mr. Joeseph Amo to sit up in the collection of revenue in the district to beef up Internally Generated Funds (IGF).

In order to meet the requirement by law that MMDAs should at least hold 3 general meetings in a year to assess projects and approve budget, the Dormaa East District Assembly in its Second Ordinary Meeting on Monday August 26, 2019, focused on considering and approving its composite budget. It also went through its 4 year (2018-2021) programme’s activity to make necessary imputes and review for approval.

Discussing itemized issues in the previous minutes, the District Coordinating Director (DCD), Mr. John Jeojo Amanah expressed dissatisfaction with the work of the revenue head and his collectors; saying that some of them have fixed their own amount to be given to the Assembly every month.

This resulted in a heated debate as some members of the house fuel the discussion up by calling for his replacement for lack of performance. In his explanation, the revenue head, overreacted and that nearly lead to his dismissal from the meeting. However, upon an apology, the house forgave him on condition that he come up with proactive measures, and prudent strategies to correct the wrongs in his department in order to give the Assembly the expected revenue especially in the area of property rates.

The District Chief Executive, Hon. Emmanuel Kofi Agyeman, who had initially given the head of revenue the benefit of the doubt because he had seen Mr. Amon embarking on several supervisions, suggested to the department as well as the house to consider giving revenue mobilization on contract to see if that would be helpful.

Meanwhile he has asked the department of revenue to bring their proposals to see how best the Assembly can support to achieve the projected target.

He explained that the district property rates alone could triple IGF if properties are well valued and collected genuinely.

Among other things, the DCE, called on the Assembly Members to look for a central point in any of the major towns of the district for the siting of the District Center of Agriculture Commerce and Technology (DCACT). He made the call in his opening remarks when he explained some disagreements mounting up around some suggested locations the Assembly foresee as a possible venue for the enterprise in the District Capital (Wamfie).

He was of the view that since Wamfie is central to all the surrounding towns and villages, it would have been more appropriate siting the center there, however, Assembly Members should also help get citizens to understand the use of the center in order to find an advantageous place in the near bye towns if the Wamfie Idea would still not hold.

the District Center of Agriculture Commerce and Technology (DCACT) is related to Government’s Agriculture Flagship Programmes with a 13 member Management Committee, tasked to identify and developed at least 2 major cash crops, food crops as well as livestock into exportable products. It is also to maintain an electronic database of farmers, their farm size and to help establish at least one major agriculture processing factory in the district. The same center in some 33 district would house the Agriculture Mechanization Center (AMC) which will support farmers with the use of machines in all farming activities.

Hon. Emmanuel Kofi Agyeman explained, the equipment to start the Agriculture Mechanization Center has already reach the District and it is being kept in front of the Police Station and when the DCACT is ready it would also house the AMC. He reiterated that the intervention was very important and the district is very fortunate for being among the few districts who benefited from such an initiative.

Answering most of the questions on the floor of the house, the DCE who brief members about the Okuafo Pa Project (the multi magnificent edifice of Agriculture Training Center being built at Kyeremaasu to serve the entire Bono Region) said the project was mainly to resource local farmers, especially the youth to enter into an agric related vocation on their own with all the needed assistance coming from the school.

He thanked the government of Ghana and the Italian government for their support, as well as ENI the Italian oil and gas company through whose social responsibility the district has earned the project.

He added, President Akuffo Addo is being expected to do the commissioning soon.

Other follow up questions covered some displaced priorities of the assembly, the new GES curriculum, how the assembly plans getting office and residential accommodation for workers among other issues,

The District Education Director, Rev Joseph Amoa Mensah informed the house on how best the directorate intends fighting malpractices and getting teachers to give their maximum even at the expense of lack of resources. 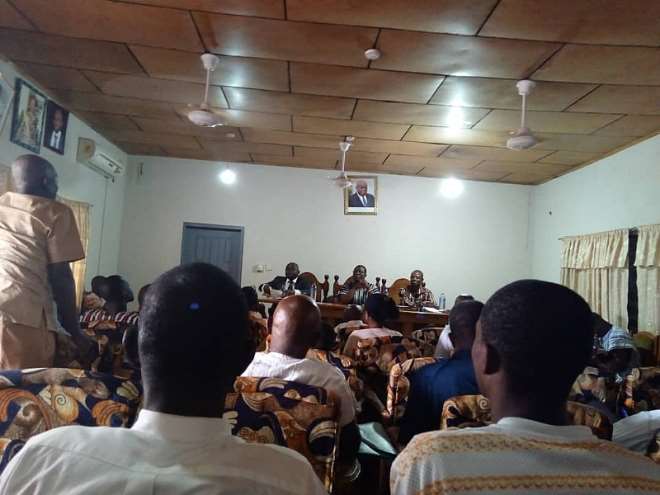