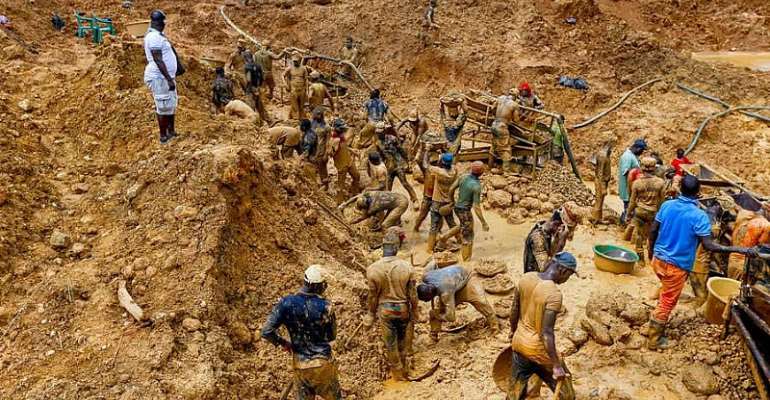 If care is not taken, galamseyers will morphe into warlords, and plunge our country into chaos. All the ingrediants, which could lead to a total breakdown of law and order, across Ghana, are now in place in our country. Not a single day passes, without some violent protest, or spontaneous public demonstration, being reported by the Ghanaian media. Clearly, we are sitting on a powder keg. Long story short.

That is why our elected leaders need to wake up and confront the threats facing the Ghanaian polity - for underneath the patina of a peaceful African democracy, an image sold to the world by clever government communicators - a cauldron-of-impunity is boiling away slowly. Illegal gold mining and its handmaiden, illegal logging, could destabilise Ghana. Yoooooo. Hmmmm.

The lawlessness we are witnessing across Ghana, today, shows that those charged wth the responsibility of ensuring the safety of our Republic, and the security of all who live within the borders of our nation, have failed President Akuffo-Addo - who gave them the privilege of serving Mother Ghana by appointing them to their positions. They must all be sacked. To allow them to remain in their positions, will be to put our liberal society and democratic system , at grave risk.

The question is: Is it not intolerable that greedy criminals, are getting away with degrading vast swathes of the Ghanaian countryside, mining gold illegally, and felling trees illegally, on top of that, to fund their galamsey operations? As a peace-loving people, we must never forget that the brutal civil wars in Liberia and Sierra Leone, were fuelled by super-ruthless warlords, who wanted to gain control of the abundant natural resources, of both nations.

To avoid a similar fate befalling our country, drastic action to rid Ghana of illegal gold miners, ought to be taken as soon as practible. We must must not allow what happened to Liberia and Sierra Leone, to occur in our homeland Ghana, too. The country must be put on a war footing to fight and end the galamsey menace.

That is why the time has now come, for the more responsible sections of the Ghanaian media, to shine their spotlights on the dishonest officials in the mining sector's regulatory bodies, who take bribes to fast-track the processes, for obtaining all the necessary documentation, needed by players in the small-scale sector, to lawfully mine gold.

Alas, it is an open secret that a lucrative trade has now developed, in which issued licences and permits required by the regulatory bodies, to enable small-scale gold miners to operate legally in their concessions, are being sold to galamsayers to provide them with legal cover, to legitimise their illegal mining operations.

As we speak, Hagnela Mining Company, a mafia-like entity, the license of which has expired, is guilty of many infractions of the Minerals & Mining (Amendment) Act, 2015.

Yet, after a visit to the area of the Atewa Range in which our property lies - which they are now destroying - by officials of the regulatory bodies overseeing the mining industry, the promoters of Hagnela Mining are now allegedly using the license of Oheneba Mining Enterprise, as legal cover, for the destructive galamsey it is carrying out in my family's privately-owned freehold 14-square mile upland evergreen rainforest property.

How can that be, I ask? The Minerals Commission must ensure that the promoters of Hagnela Mining Company, and Oheneba Mining Enterprise, are arrested, and swiftly prosecuted. Hopefully, their guilt will be established after due process, and they will be handed 20-year sentences - using all the gathered evidence showing their many infractions of the Minerals & Mining (Amendment) Act, 2015. Enough is enough, Haaba.