On corruption allegations: The NDC founder, Rawlings, is our ‘principal witness’! 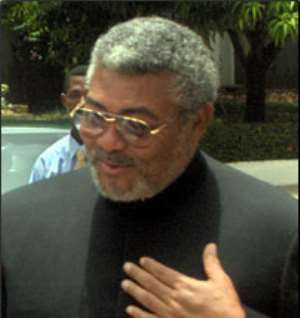 Apparently, the political opportunists have made it a habit of capitalising on the Ghanaians abhorrence on bribery and corruption at the slightest opportunity to score cheap political points.

If that was not the case, what else would motivate the NDC clamorous communicators and their remorseless apologists to describe the well-acknowledged incorruptible President Akufo-Addo as ‘corrupt’?

In fact, anyone who has passing familiarity with the revoltingly ugly events which took place during the erstwhile NDC administration will be extremely surprised to hear that the same people are evocatively accusing President Akufo-Addo of not doing enough to combat corruption and therefore he is ‘corrupt’.

Dearest reader, take my word for it, I am not seeking to ‘play God’ and pass judgment, but for the sake of balanced annotation and to set the records straight, I shall grub into the regrettable bribery and corruption cases which took place during former President Mahama’s coarse administration.

If you may recall, following the NDC’s 2016 humiliating election defeat, the party leadership set up a 13-member committee, presided by former Finance and Economic Planning Minister, Professor Kwesi Botchwey with the sole mandate of travelling to the length and breadth of the country to interact with the grassroot supporters and investigate the causes of the historic defeat and put forward recommendations accordingly.

Credible sources have it that the Botchwey Committee’s report indicted former President Mahama, the NDC’s 2016 flagbearer as the main cause of NDC’s humiliating defeat.

On the issue of corruption, the Botchwey Committee’s report is quoted to have stressed that “the then flagbearer of the NPP, Nana Akufo-Addo, who is the incumbent President, took advantage of his well-received incorruptible descriptive label to the disadvantage of NDC’s flagbearer, former President Mahama, who was perceived to have endorsed corruption in his government.”

If you may remember, during the delivery of the June 4 address last year, His Excellency Ex-President Rawlings referred to the said minister as ‘small little character,’ who regrettably paid hard cash to the utter dismay of the property owner.

Former President Rawlings was reported to have disclosed somewhat dejectedly: “What did this small little character do? After we lost the 2016, I said he went and paid cash for two mansions, one for himself and one for his wife.”

“I want to remind people that we could not have possibly forgotten that Generals were executed. The greed, corruption and injustice of today are a thousand times more than what these Generals were executed for, and if we are unable to restore a firm measure of integrity into our dealings, then the blood of many would have been shed in vain.”

In fact, it is not only the founder of NDC, J. J. Rawlings, who has been expressing grave concern over the wanton sleazes and corruption in the Mahama’s administration, some NDC stalwarts have previously voiced out concerns on the reprehensible behaviour.

Take, for instance, prior to the NDC’s 2019 flagbearership contest, the Honourable Bagbin, the MP for Nadoli Kaleo and a contestant of the NDC’s presidential race, attributed the humiliating defeat of Mahama and the National Democratic Congress (NDC) in the 2016 general elections to bad governance (See: ‘Mahama's boys bought V8, built mansions in 4 years – Bagbin; myjoyonline.com/ghanaweb.com, 19/08/2018).

Mr Bagbin was reported to have quizzed: “Don’t tell me that the boys that suddenly came closer to the president within four years can build mansions and buy land cruisers and you say there are no resources, where are they getting the money, their salaries?”

Apparently, some observers believe that former President Mahama has more alleged bribery and corruption scandals hanging around his neck than any other president in the history of Ghanaian politics.

Observers however maintain that former President Mahama has serious questions to answer over the puzzling corruption scandals such as SADA, GYEEDA, SUBA, NCA, SSNIT, the infamous Bus Branding, the Brazil World Cup, the STX housing deal, the Brazilian aircrafts, the Ford Expedition Vehicle, the Armajaro saga, among others.

More so observers have been wondering how and why the former president can secretly accept a gift of brand new Ford Expedition vehicle worth over $100,000 from a Burkinabe Contractor called Djibril Kanazoe.

That notwithstanding, in recent times, Ex-President John Dramani Mahama has been daring President Akufo-Addo to arrest, investigate and prosecute him or any member of his administration if there is unobjectionable evidence to suggest that they amassed wealth illegally during their time in office (See: Catch the ‘supposed’ thieves to prove your charges – Mahama dares Akufo-Addo; ghanaweb.com, 30/04/2018).

Given the circumstances, it came as no surprise to some of us when we read that four courageous Ghanaians had petitioned the Special Prosecutor, Martin Amidu to probe into the alleged E.O. Group’s $13 million corporate social responsibility fund towards the development of the Western Region which the petitioners claimed to have been diverted by Ex-President Mahama (See: ‘Mahama diverted $13m E.O. Group money; probe him – Four citizens petition Amidu’-todaygh.com/ghanaweb.com, 18/06/2018).

Somewhere last year, we woke up to the regrettable news of corruption scandal in the erstwhile Mahama administration, this time, alleged oil money of GH40.5 million surreptitious transfers to the presidency, via the then Chief of Staff (See: ‘Group explains why Amidu must probe Mahama, Debrah in GH¢40.5m BOST payment’; myjoyonline.com/ghanaweb.com, 19/09/2018).

Dearest reader, take my word for it, I thought I was dreaming when I chanced on the unfortunate news about the misappropriation of $175 million loan facility secured in 2012 which was meant to provide seven district hospitals. But I was not. I was wide awake. The NDC hierarchy indeed misapplied the loan facility on the blind side of Ghanaians according to the Joy FM’s report.

The report stressed that the Mahama administration surreptitiously diverted $6 million of a government loan facility of $175 million meant to provide seven district hospitals into researching the then governing NDC’s chances of winning the 2016 general elections.

The overarching question then is: where is the rest of the $175 million loan facility?

The fact however remains that a large portion of Ghana’s scarce resources, regrettably, went down the drain due to the unbridled sleazes and corruption perpetrated by the officials of the erstwhile Mahama’s administration.

Besides, on 14th March 2018, the State filed a case of causing financial loss against the former Chief Executive Officer of COCOBOD and the CEO of Zeera Group of Companies and Agricult Ghana Limited, who have been accused of embezzling over GH260 million under the watch of former President Mahama.

In addition, credible sources have it that diligent investigations are underway in a number of suspected bribery and corruption cases, many of which are likely to end up in the law courts.

But in spite of the admissible evidence of rampant sleazes and corruption in Mahama’s government, the loyalists NDC supporters would want discerning Ghanaians into believing that the erstwhile NDC government provided exceptional governance.

Whatever the case, we hope and pray that the Special Prosecutor, Mr Martin Amidu, will work assiduously towards the battle against the pretentious enemies of the state, who are regrettably disguised in political clothing.