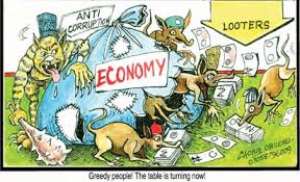 I am tired of these Africans. So, I called my wife and children abroad to warn them to be careful. Other calls were made to my girlfriends and some of my buddies abroad. Secret instructions were given to make sure my accounts are safe in the usual places. There are angry Africans abroad beating up African looters, ransacking their humongous houses and destroying beautiful exotic cars because they mistakenly think we stole money to buy what we worked so hard for.

It looks like the party is over. A few years ago, Africans from Congo in France, mistook me for their President and attacked me viciously. Then, there was this rude guy called Sowore that insulted me because some of my folks came late to the meeting in New York. We only adhere to African time nah. The last straw, was these IPOB attacking me recently. Can you imagine, a decent guy like me looking like a million box, dodging blows to “pick race” abroad? Chei!

O.k. There was this house on liquidation (short) sale I bought on this popular street, very cheap because it was almost falling down. This was the little profit I made from selling Ofada rice with my brother, Saraki. It took me several months of what they call sweat equity working on the house with my friends before the house came to life. But some people suspected it was from the loot I made in Nigeria. Allah, walay talayi, God dey see me. I suffered to rebuild that house.

What is the name of the street in London? None of your damn business but certainly not Ilchester Place in the heart of Holland Park. You really want me to tell you so that those thugs can go and waylay me, you sonabashiwereh! Abi you chop craze inside your garri and gbegiri wey Mama PutE fed you. Here I am trying to tell you that I no longer have a piece of mind. My wife, children and my girlfriends are been monitored by spies because of mistaken identity.

Wait O, so you funded girlfriends too? Those are just ordinary friends that work hard for their money. Whenever I am in London or New York, they become friendly out of the generosity of their big boobs. The problem these days is that they do not want to be seen with me anywhere but corner corner, so those thugs may not attack them. Other friends have started ignoring me like a plaque but I never trusted them in the first place. Actually, they may the thugs’ informers.

Are you saying you have houses in New York too? Oh, I bought those ones a long time ago as a student with part-time jobs when I was on military training. Anybody could buy a house then, not Potomac MD, with nothing down as advertised by those house-flipper con men. All I had to do is pay taxes and help those girls out since many of them are poor without the means to pay their ways. They are delicious, as French President said to the wife of Australian Prime Minister!

You are a Nigerian, a politician and militrician and never looted, abi? Look, I want to live the rest of my life in peace, they can take back their loot. I do not care for money anymore, this is just too much trouble. Can you imagine an African and a Nigerian for that matter, that has money he cannot spend abroad because some thugs are waiting to beat him up or at least harass him? It is worse than hell, my broda.

If you think that is hell, what about the people that are dying every day because the money they could have used for food, good schools, hospital and roads are being diverted by looters like you? Oh, do not get me wrong. I really pity those poor people. It is the reason, I and my government built so many hospitals and schools. But the same people divert the funds meant for their maintenance and the salary for workers. These poor people prefer imported food.

Do you go to those hospitals for treatment or send your children to those schools? Look my friend, do not get personal. I can afford it, that is why I do it. Really, I do not mind going to hospitals in Africa but the people are too nosy. They want to know my personal information. The other time, General Danjuma went to hospital for upstairs disease. He had to fly out to prevent his health information going public. Unfortunately, they do not treat African mental disease abroad. So, they sent him back home to Babalawo! Shey you get?

Are you aware that University of Nigeria, Nssuka; Ahmadu Bello Teaching Hospital, Ibadan and Lagos Teaching hospital have first class accommodation to treat any disease and if the specialist is not in Africa, they would fly him in? You see, now your craze nor be small. You want a whole President to go and reveal his blokos to the whole world in Nigeria! Sometimes, some people do not make sense at all at all.

Which President are you talking about, Jubril? Jubril ke, no nah Momodu! I thought I was talking to sensible person about how to hide abroad without being attacked by IPOB, Arewa, OPC and those Niger Delta militants abroad. If there is no way I can spend my money, there is no reason to take my loot abroad. After all, even Ibori and Alamsco found out that running out of Nigeria was a mistake and a waste of time. You can loot all you want and enjoy anywhere in Africa.

You know that song: apeteshi nor good O? Look I am talking about loot, you are talking kunu as if a screw is missing from your head. I am not Amechi that said they stole because nobody would stone them. Lately, he is singing a different tune. He said if anybody attacked him abroad, he would defend himself. So, he is not giving up his loot.

But you are giving up your loot? Hmm, I remember that song too: Apeteshi too good O! So, my people say: if you put sugar in the mouth of a baby, he never spit it out. Nobody gives up his loot or privilege willingly. Hell No!

The author has 519 publications published on Modern Ghana.

You Won't Be Shielded For Misconduct – IGP Cautions Police O...
40 minutes ago