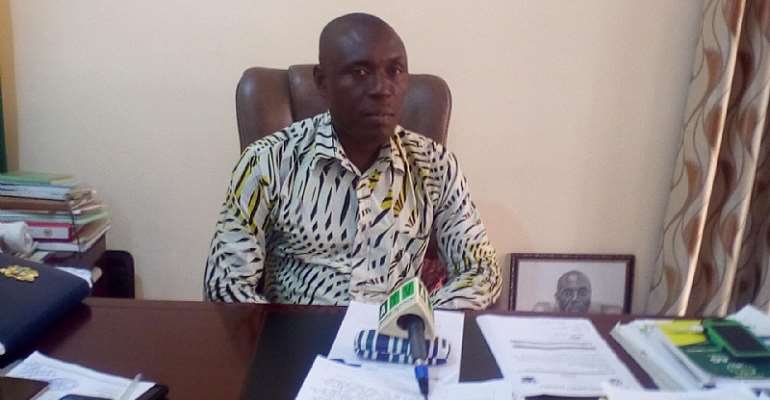 Gomoa Central District Chief Executive, Hon. Benjamin Kojo Otoo has disclosed that His Excellency Nana Addo Dankwa Akufo Addo led NPP Government's Planting For Food and Jobs has attracted 70% of the youth in the District to go into serious farming business contributing significantly towards reduction of poverty and unemployment

He has noted that farming has become attractive not only to the youth but the elites and the working class in the District as well.

" Am happier being with the NPP government under His Excellency Nana Addo Dankwa Akufo Addo, President of the Republic of Ghana. This is because people are feeling the positive impact on his policies and interventions. Gomoa Central is getting its fair share of the national cake"

Hon. Benjamin Kojo Otoo disclosed these when he presented 6 Motorbikes to District Extension Officers of the Ministry of Food and Agriculture at Gomoa Afransi to argument their operations.

" Gomoa Central District is having its fair share immensely from Planting for Food and Jobs programme. We have received the needed support from Ministry of Food and Agriculture to implement this flagship Programme.

This has gingered many people especially the youth to go into serious farming and have taken it as a business to better their lives.

Out of the over 6,000 farmers that have registered with the Agriculture Department of the Assembly, 70% of them are within the Youthful bracket. They are between the ages of 32 to 40 years according to our data.

This show how effective the policy is impacting on the lives of the people in Gomoa Central especially the youth. Planting for Food and Jobs has great potential for them

I must put on record that last year's Gomoa District Best Farmer was 32 years old. It is to confirm our data base in the Agriculture sector"

Hon. Benjamin Kojo Otoo cautioned against misuse of the motorbikes warning those caught in such act would be severely dealt without fear or favour"

" I want to put on record that these Motorbikes are for Extension Officers. It is not meant for private work. They are to use them to reach farmers at their separate locations.

Gomoa Central District is among the Best in the Central Region according to food production table and we are doing our best to be among the best at the national level.

Government is doing enough for farmers to enable them derive profit from their produce thus eradicating poverty which has been associated with the farming industry.

Gomoa Central District Director of Agriculture, Mr. Richard Marcus Odame who received the Motorbikes on behalf of the Extension Officers commended the government for the kind offer adding it would enhance operations of his outfit in the area of transportation for the officers to reach more farmers at their farms

Mr. Richard Marcus Odame said hinder to it was extremely difficult reaching most farmers in the District due to lack of transportation couple with poor road network.

" With these motorbikes, each officer is expected to reach at least 5,000 farmers under his or her field of operation. This will also boost crop productivity in the Gomoa Central District.

Mr. Alfred Nii Ayi Ayeetey, Gomoa Central Deputy Director of Agriculture cautioned Extension Officers who would be using the Motorbikes that they were meant for official duties alone bearing in mind that they have been insured in the name of Ministry of Food and Agriculture so they cannot use it for their private businesses.