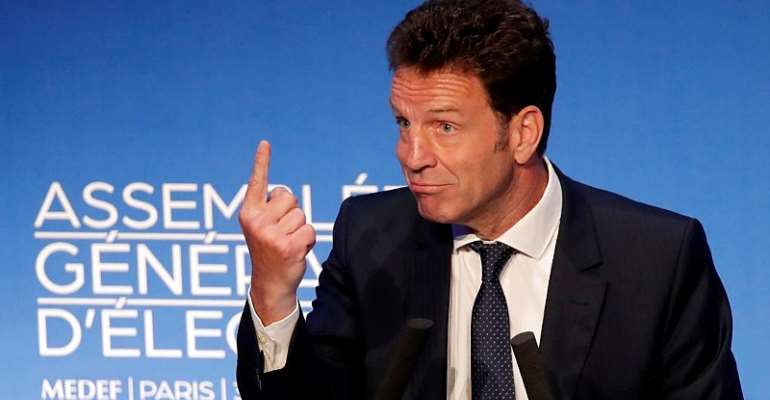 French business group Medef has chosen to blend the optimism of contemporary entrepreneurship with a nihilistic punk slogan based on lyrics from the 1977 Sex Pistols anthem “God Save the Queen” in the title and theme of its annual conference, which opened Wednesday.

Medef, France's union representing business leaders, meets for a late-summer conference every year to discuss its priorities and position on upcoming government reforms.

The title of this year's instalment, “No(s) futur(s)”, plays on the homonymic resonance of the French phrase “nos futurs” (our future) with “no future”, a lyric from the 1977 single also included on the album Never Mind the Bollocks: Here's the Sex Pistols.

“It is indeed a reference to the Sex Pistols track,” Medef deputy president Patrick Martin told RFI when asked whether the business leaders' union had gone punk over the summer.

Punk theme in posh surrounds
At the opening of the conference at the Hippodrome de Longchamps racecourse, near Paris, Medef President Geoffroy Roux de Bézieux took the stage as the track plays in the background.

“The Sex Pistols predicted the collapse of England just before the arrival of Margaret Thatcher,” Roux de Bézieux said.

“The punk movement was already articulating an identity crisis, a violent calling into question, which is a regular part of capitalism.”

Challenges to liberal capitalism have to be taken seriously, Roux de Bézieux said, as business leaders prepared to endorse government proposals to increase the period of time required to work before retirement.

The theme of reinvention runs through the messaging of Medef on the event.

“In developed countries, middle and working classes have seen their income stagnate or even regress. Prosperity is not always fairly shared,” Roux de Bézieux tweeted.

“Our conviction is that entrepreneurs will succeed, as they always do, to find a future, to reinvent the model of the market economy.”

The meeting, generally held in a business school, moved to the posh hippodrome in a refurbished, environmentally friendly building. It has also adopted a format described as a “gathering of entrepreneurs of France”.

Never Mind the Bollocks
When it appeared in 1977, the track "God Save the Queen" was controversial for lyrics deemed offensive to the UK monarchy (“God save the queen/ the fascist regime”) and critical of the direction of British society (“there's no future in England's dreaming”).

In an unlikely coincidence on Wednesday, across the English Channel “God Save the Queen” was trending on Twitter, after British Prime Minister Boris Johnson said he would push the suspension of parliament to 14 October – just two weeks before the Brexit deadline.