Eye on France: To bee or not to bee 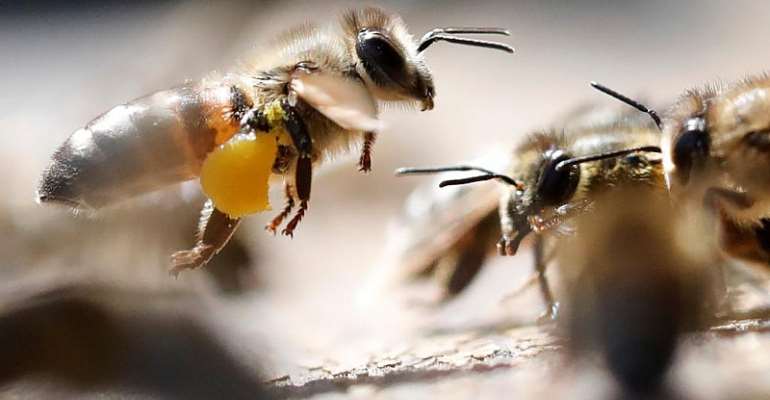 Over the past three decades, since the introduction of the family of insecticides known as neonicotinoids, Europe's flying insect population has declined by three-quarters. That's an awful lot of dead creatures. And think of the impact on the birds and bats for whom bugs are daily bread.

Europe is not a good place in which to be a bee.
Earlier this summer, according to the Science pages of today's Le Monde, the European Union decided to do absolutely nothing about a situation which scientists and ecologists have been describing as potentially catastrophic, not just for the bees, birds and bats, but also for us humans, who depend on the pollination work the insects do for most of the food we eat.

Le Monde's verdict is without appeal. The centrist paper says it took the European parliament six years of senseless hesitation to reach this summer's decision which is nothing less than a death warrant for biodiversity.

The crime is, of course, buried in bureaucracy.
What our elected European representatives did, in fact, was pass a technical document which is based on outdated ways of checking the impact on pesticides on, for example, bees.

To do that, the deputies had to ignore the recommendations of the EU's official experts at the Food Security Agency. Practically every measure proposed by the experts has been put on the back burner, where they are likely to remain until the autumn of 2021, at best.

And the same experts have been warning since 2012 that the current tests do nothing to protect bees and butterflies.

Who tests the testers?
Part of the problem is that the tests look at the impact of a single dose of a particular product on the adult bee. But these chemicals are effective for months, and have an impact on the larvae as well. The tests, in other words, are worse than a waste of time.

So the situation is that, though three of the most commercially successful neonicotinoids have been banned in Europe since last year, they have been replaced by products which are just as problematic. And the tests in force do nothing to stop the new chemicals from killing billions more bees.

All of which means that, while Europe's invisible, anonymous administrators can congratulate themselves on taking strong action to deal with one part of a complex problem, the insect biomass continues to decline at a rate conservatively estimated between 75 and 80 percent.

Well done, Europe!
The clean windscreen syndrome
The Le Monde article comes with lots of graphs and statistics, which are useful, if you go to the trouble of reading them. But the article has something even better, meaningful to every reader over the age of 40 who drives a car. And that's the image of the clean windscreen.

Older drivers will remember the blood-spattered end of every summer motor journey, with the mangled remains of the insects encountered en route spread all over the front of the car. That doesn't happen anymore, simply because there are far fewer flying beasts for the average motorist to crash into.

And, while there are plenty of other suspects...temperature change, variations in rainfall, frost, street lighting, mobile phone masts...the fact remains that the dramatic decline of Europe's insect populations coincides exactly with the massive use of the new generation of pesticides.

The neonicotinoids were marketed as the safe answer to the human health problem posed by old-fashioned chemical sprays. Some of that stuff went on the crops, but a lot more went into schools, rivers, hospitals and human lungs. The new killers are dropped on the soil at the same time as the seeds are sown, and continue to be effective throughout the lifetime of the crop.

Beekeepers have been complaining since 1994. Since 2003, a French expert committee, working on insect mortality for the agriculture ministry, has been proving incontrovertible proof that the honey producers are right. And the committee has even proposed its own tests for new pesticide products.

In vain.
The inefficient old tests remain in place, leaving the door open to a wave of poisonous substances. And now Europe has followed the French example, ignoring the warnings of the expert panels it put in place.

It's not getting any easier to be a bee, as Hamlet might have remarked.