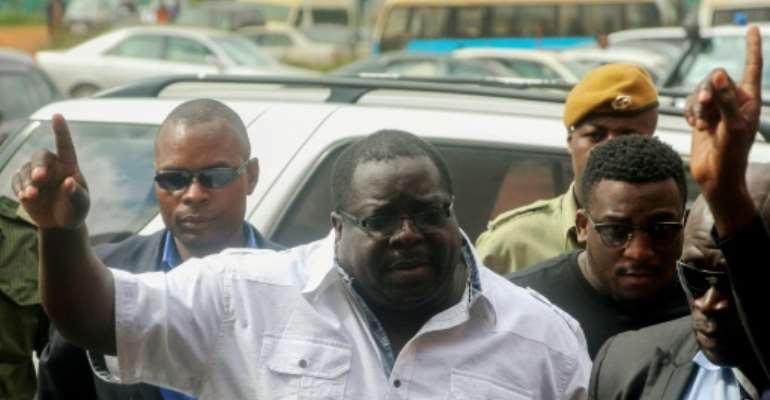 A leading critic of President Edgar Lungu, Chishimba Kambwili (C), has been arrested for defaming the president. By DAWOOD SALIM (AFP)

A Zambian opposition leader and fierce government critic was arrested on Wednesday on charges of defaming President Edgar Lungu after a video in which he allegedly inferred that the president was a dog.

Lungu, in power since 2015, is facing mounting complaints from the opposition over accusations his government has become authoritarian and cracked down on dissent.

Chishimba Kambwili, 50, leader of the opposition National Democratic Congress (NDC) said in a video that went viral on social media that "some dogs from Chawama do not get tired of travelling".

Chawama is a Lusaka slum where Lungu lived before becoming head of state in 2015.

Lately Lungu has been travelling abroad including to India last week, and to Tokyo where Japan is hosting development talks with African leaders this week.

Kambwili was interrogated for nearly two hours before being taken into custody at Lusaka central police station, an AFP reporter said.

"He has been charged for the offence of defamation of the president following the video that was circulating where he (referred to) some dogs from Chawama. The police think he was referring to the head of state," his lawyer, Christopher Mundia, told reporters.

But Kambwili himself was unfazed.

"These people are scared of me. I have been arrested nine times in two years," he told reporters as he went into questioning.

He is expected to appear in court on Thursday.

If convicted, the former lawmaker of the ruling Patriotic Front, faces three years in prison.