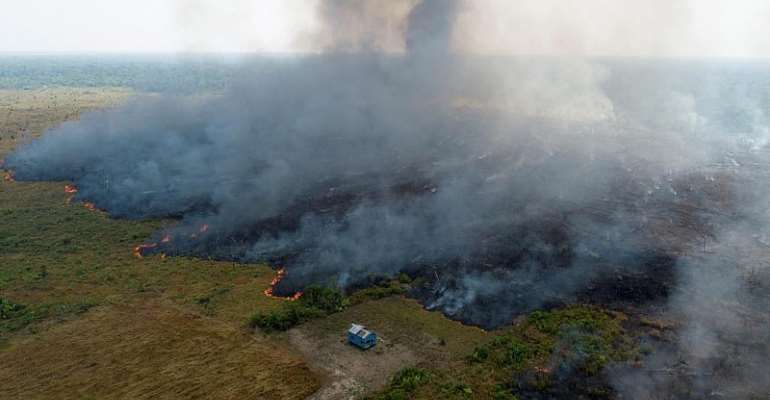 Brazilian President Jair Bolsonaro said Tuesday he would consider accepting international aid to fight Amazon forest fires, pledged at the G7 summit in Biarritz, if French President Emmanuel Macron backtracks on remarks made during a spat in recent days.

Bolsonaro's administration on Monday refused 18 million euros' worth of aid pledged by G7 nations meeting in France and accused Macron of “colonialist and imperialist practices” in seeking to make the Amazon fires an international issue.

Brazil changed its tone slightly late Tuesday, with the government now saying it was prepared to accept international aid to fight the fires as long as it could decide for itself how to use the funds.

“Brazilian sovereignty is not negotiable,” spokesperson Rego Barros told reporters, adding Brazil was not opposed to dialogue with France.

Bolsonaro himself said accepting the G7 package was conditional on Macron retracting remarks made during an ideological and increasingly personal war of words over the course of the summit.

“Mr. Macron must withdraw the insults he made against me,” the Brazilian president said.

“First, he called me a liar and then, according to what I have heard, he said our sovereignty on the Amazon was an open question.”

Over the course of the three-day summit, Macron accused Bolsonaro of lying about climate commitments and threatened to block a free trade deal with South America.

Bolsonaro in turn accused Macron of having a “colonialist mentality” and mocked his wife Brigitte on social media.

Amazon fires 'a tipping point'
Data on Wednesday showed more than 82,000 forest fires blazing in Brazil, more than half of them in the massive Amazon basin, even as military aircraft and troops battle them.

A top global forestry management group urged more international efforts to contain the fires on Wednesday, warning the overall health and sustainability of the forest was at stake.

“This is something that might affect the integrity of the Amazon as a whole, because if the forest fires spread, the grasslands become more prone to forest fires,” Gerhard Dieterle, executive director of the International Tropical Timber Organisation, told AFP agency.

“Many experts fear it may be the tipping point” for the rainforest, said Dieterle, who was representing his group, an intergovernmental agency prompting sustainable forest use, at a conference on African development in Japan.

Asked about the G7 pledge to combat the fires, Dieterle said it was “a beginning but much more is needed.

“This is the national sovereignty of Brazil,” he said. “If they ask for funding, I think the world might be willing to provide more resources.”