Do Galamsey, Go To Jail 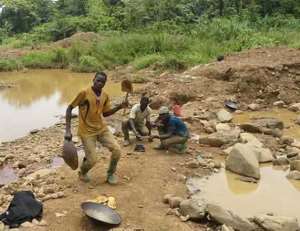 When the President, Nana Addo Dankwa Akufo-Addo, declared war against galamsey and went on to tell Ghanaians that he was prepared to put his presidency at stake to make sure the fight against illegal mining succeeds, I knew the man meant business. The canker had been with us for so many years but no Head of State, be it military or civilian ever made such a bold statement. No wonder the sages say history is mad from bold actions.

The Operation Vanguard was launched made up of the military and the police. As usual in every society there is bound to be some bad nuts. Some members of the Operation Vanguard went wayward and collaborated with these criminals to help them engage in their illegal operations. Additionally some irresponsible and criminal chiefs, continued to give out land for the illegal miners to operate. Even some cocoa farmers, who cultivate the most important cash crop for the survival of the nation, sold their cocoa farms for these galamsey operators to cut down the cocoa trees and prospect for gold. These shameless chiefs did not know that they were destroying children yet unborn.

Almost two years after the ban on galamsey, these criminals continue to pollute the river bodies and degraded the land used for farming for food for the citizenry. The clergy, well meaning citizen, businessmen and women and almost all Ghanaians spoke against the menace and pledged their support for the president. The churches, mosques and traditional worshipers preached against the menace, but sadly some criminal individuals continued to operator while the citizenry watched hopelessly. After all, they don't owe the land and as such they could do absolutely nothing. And to add insult to injury, we had no laws enacted to back the ban on illegal mining, so to prosecute any galamseyers caught in action was not possible and they were left off the hook.

Today, the Parliament of Ghana has passed a law making galamsey illegal and punishable. The president has assented to the law, making it fully operational. That was the happiest day in my live. I have had cause to write about the menace of galamsey in this column for umpteenth times but my plea fell on deaf ears until the president spoke out on the issue. If you are a commander-in-chief of an army you try your possible best to win one battle after the other, until the war is won. In the case of the president who is the Commander–In-Chief of the Ghana armed Forces, he started the battle by banning galamsey and he got the support of the people. Then he inaugurated the Operation Vanguard and many galamseyers were arrested and the instruments used for their operations were destroyed. Many excavating machines were destroyed and Chinese who were at the forefront for this illegal mining were arrested and deported simply because there was no law to prosecute and jail them.

Our polluted river bodies started to take good shape again and the environment had a brief of a new life. Sadly some hard–hearted individuals continued to operate and the naysayers were quick to say the fight against illegal mining has failed. Then the president tabled a bill in parliament for a law to be enacted to make illegal mining punishable by law. Parliament deliberated on the bill and came out with a jail term between fifteen and twenty five years for anyone caught engaging in galamsey. That is the third battle and it has been drawn. We as citizens have a duty to play here. It is incumbent upon all Ghanaians to report anyone who engages in galamsey so that when they are arrested they will be made to face the law and if found culpable they will go to jail for fifteen or twenty five years. If we fail to corporate with the law enforcement agencies and look the other way, while the menace continues, generation yet unborn will say “our parents were so reckless and useless to allow criminals to destroy our water bodies and the environment”. This I think will not be a good compliment and we will be turning our bodies in the graves.

Even though Parliament has done a yeoman's job by enacting the galamsey law, it is up to our judges to but Patriotic enough. They should not hesitate to do the right thing by handing down the right jail term for anyone brought before them for doing galamsey and it should be done quickly. If in a year we are able to send about one hundred culprits to jail, I can bet with my last Cedi that the fear of God will keep people from trying to do galamsey. We are aware some of our judges are corrupt and we are also aware some of these galamsyers have their godfathers who are fabulously rich and can buy these judges. The media, the watchdog of the people, should wake up and make sure they follow any case concerning illegal mining brought before the law courts, to its logical conclusion. Undercover journalist like Anas and Azure and their teams, should sharpen their weapons and expose any judge who takes bribe to free culprits brought before them.

One day I visited a friend who is a prison officer and I asked him to make me see where the prisoners sleep. What I saw gave me a sleepless night. If human beings are made to go through this ordeal, then one must pray to God not to find himself in such a situation. Those who intend to treat this new law with contempt should think twice because the conditions in our prisons are very horrible. It is better to join the Planting for Food and Jobs, a flagship programme of the NPP government rather than trying to make quick money and later find yourself in prison. Ghana is blessed with fertile land and almost every crop can be cultivated here.

A few years ago when the late Colonel Gadhafi traveled by road across Africa and reached Ghana, he returned back home to his country and told his people that Ghanaians are lazy. He said even his desert country could cultivate onions, cabbages, pepper, potatoes and rear their animals but when he visited Ghana he saw huge forest land lying fallow but sadly the country imported crops which could be cultivated in the country. He wondered why Ghanaian youth dare the dangerous Sahara desert to go to Libya to engage in menial labour. When I listened to Gadhafi, I burnt down my head in shame. A country of less than thirty millions souls had to import onions, tomatoes, and even raw pepper from countries like Burkina Faso, Niger and Ivory Coast. We are living by the river and yet we continue to complain of thirst. Excuse me while I change over to go to my maize farm. You can stay in Accra and do 'wala tu wala sa”. Who cares!!!

The author has 104 publications published on Modern Ghana.