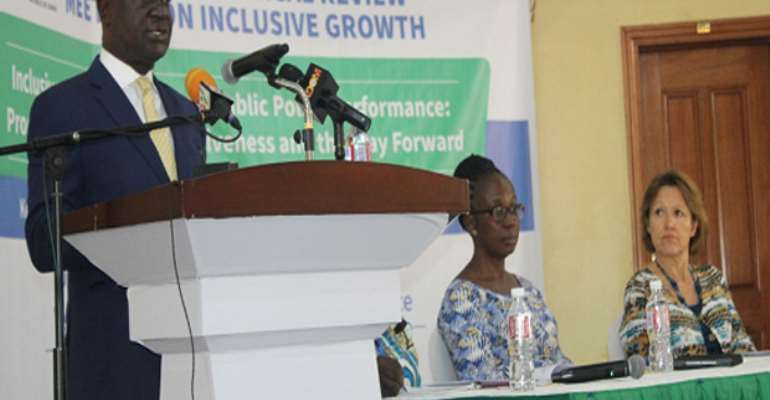 The disparity in incomes for Ghanaian workers is going higher despite the modest developmental gains the country has recorded.

An analysis of income distribution using the Gini Index showed a widening income inequality since 1992, increasing from 37% to 43% in 2017.

According to experts, this trend poses a threat to poverty reduction and inclusive development. This was disclosed at the Technical Review Meeting on Inclusive Development Forum held in Accra.

The day's forum sought to assess progress made on commitments from the inclusive development forum held in 2018. It also examined ways in which the implementing partners would ensure better integration of child responsive perspectives into national, sectoral and district development processes.

Opening the forum, the Minister for Planning, Professor George Gyan-Baffour, expressed worry over the growing trend of inequality, adding that the phenomenon created obstacles to overcome poverty and exclusion, as well as building a prosperous and cohesive society.

“In fact, it is no exaggerating to say that this could put at risk the democratic process as citizens may become permanently disengaged if they feel that governments no longer work for them,” he said.

He, therefore, said that the Akufo-Addo government was working to bridge the inequality gap to lift people out of poverty, sustain economic growth and maintain social cohesion.

“This is the more reason why the national vision expressed in the Co-ordinated Programme (2017-2024) is not only aimed at creating jobs and prosperity but also enduring the opportunity is for all to access,” he said.

He further stressed that government was in tune with the urgent political and economic imperative to address inequalities hence the various government initiatives being implemented.

“Child protection can be greatly facilitated with the effective functioning of the law enforcement and social welfare officials,” he added.

UNICEF Representative in Ghana, Anne-Claire Dufay, called for further probe into the underlining cause of inequalities especially among children saying “a key question that we still need to answer is how best can we yield a more equitable society without compromising economic growth?”