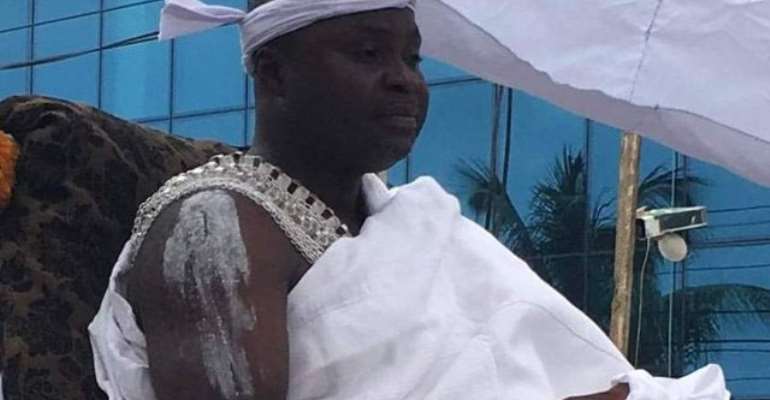 Autopsy has reportedly been performed yesterday on the body of the murdered Asamponhene, Oheneba Kwadwo Aforduor.

The exercise was carried out by senior pathologists at the Komfo Anokye Teaching Hospital (KATH) in Kumasi.

Sources at KATH said a police team, including some senior officers and top investigators, was present during the important medical exercise to ascertain the actual cause of death.

Another source disclosed that some family members of the late chief were allowed to witness the medical exercise.

DAILY GUIDE gathered that the chief's body had been at the KATH morgue since it was discovered in a vehicle on the outskirts of Ejura.

The performance of the post-mortem on the body, a police source disclosed, would go a long way to aid their investigations.

A source said even though there were viable marks of stabbing on the chiefs' body, the autopsy would determine the exact cause of death.

The gruesome murder of the Asamponhene has sent shockwaves in Kumasi and the police are making strenuous efforts to pick up and interrogate one Sadat Mohammed, 38, aka Alhaji or Mallam, who the law enforcement agency suspects might know something about the murder case.

The chief was found murdered last week in his black Land Cruiser at a place called Ebuom on the main Ejura-Nkoranza highway in the Ashanti Region.

The main person of interest in the case called Alhaji or Mallam is married to a queen mother in Kumasi and since the unfortunate murder of the chief, his phones have been switched off.

The Alhaji is said to have links in Benin and Mali but there is no official information that he has left Ghana, even though the police said he and his wife cannot be found in Kumasi.

Investigations made by the police so far indicated that Alhaji was a close friend of the late traditional leader.

The Asamponhene, according to the police, visited Alhaji in his house at Odeneho Kwadaso on Sunday morning. Later, the two friends travelled together on that same day.

Some hours later, the body of the chief was found in his black Land Cruiser vehicle at Ejura.

The police gathered that Alhaji then 'vanished' with his wife in a taxi, even though they own a fleet of cars.

After several attempts to locate Alhaji had proved futile, the police entered the house again and towed away Alhaji's white Land Cruiser car to the police headquarters in Kumasi.

The white Land Cruiser is not yet registered even though the provisional number plate shows that it was cleared from the Tema Port.

You Won't Be Shielded For Misconduct – IGP Cautions Police O...
22 minutes ago