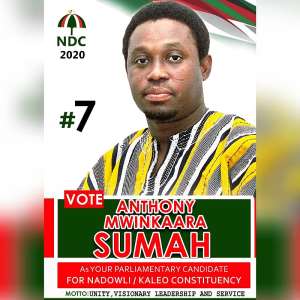 He pulled a surprise by winning the Nadowli-Kaleo Parliamentary primaries decisively.

Seven candidates contested the Nadowli-Kaleo seat but Anthony pulled 374 out of the total 875 total vote cast making him the winner.

The Nadowli-Kaleo seat has been held by NDC with the current second Deputy Speaker, Hon Alban Bagbin occupying the seat since 1992, making him the longest serving Member of Parliament in Ghana's political history.

Hon Alban Bagbin has bowed out honorably after many years of occupying an enviable political niche. Many young politicians saw this as an opportunity to "try their luck" but Anthony Sumah Mwinkaara has become the "royal Prince" of the cherished seat of the Nadowli-Kaleo.

In a statement signed by the communication officer of the National Democratic Congress on the Nadowli-Kaleo, Sylvester Biekpe, the executive committee called on all aspirants to put aside their political differences and support the Parliament candidate.

They described the overwhelming confidence reposed in Anthony as "a social contract with the entire NDC family to retain the most cherished and valuable asset of the party, Nadowli-Kaleo seat."

Over the weekend, the National Democratic Congress (NDC) held the delegates' conference to elect a parliamentary candidate. At the end of polls, Mr Tony Sumah Mwinkaara was declared by the Electoral Commission as the winner of Saturday's election to lead the umbrella family into the 2020 Parliamentary election in the constituency.

The entire constituency executive committee hereby congratulates our newly elected Parliamentary Candidate for this resounding victory. The leadership regards this overwhelming confidence reposed in you by the delegates as a social contract with the entire NDC family to retain the most cherished and valuable asset of the party, the Nadowli-Kaleo seat.

Again, the leadership of the executive committee wishes to congratulate the other aspirants who took part in the race. We acknowledge the decorous campaign played by all of you to ensuring that the election was free, fair, peaceful and successful. Thank you for the maturity shown throughout the campaign.

To the delegates who took part in the process, leadership is grateful to you for an incident free election. We are also grateful to the election and organising committee for their work as well as all comrades who in one way or the other contributed to the success of this Parliamentary primaries.

In conclusion, the chairman and committee members wish to call on all gallant comrades to bury their differences that might have arisen from the primaries and work in unism towards the common goal in 2020, to retain the parliamentary seat. We must all resolve to work together and win together as a family. The executive committee will do their ultimate best to support our incoming Member of Parliament to win election 2020 for God, Party and Country.

Once again, congrats to Mr Tony Sumah and thank you to everyone.