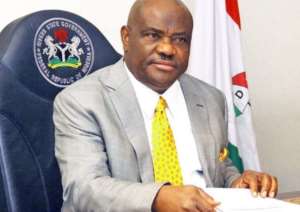 Religion is a volatile issue in Nigeria, anytime, any day. Anybody who wants to understand the Nigerian fault line should commit a religious faux pas. This is worse when it has to do with Islam. Things easily boil over as if a national conflagration is imminent. This is especially the case when the culprit is a Kafir, or a non-muslim. Or when some perceived unbeliever is involved. There is usually seething resentment and implacable anger, thirst for blood and quest for vengeance. The thin line demarcating moderation and extremism, kindness and cruelty, reason and blind faith blurs and quickly disappears. This has been the fate of Nigeria. And this Nigerian predicament is not changing for the better any time soon no matter how the religious try to pretend, hide or deny this open sore. This Nigerian religious reality ominously holds sway.

This was recently the case with the governor of Rivers State, Nyesom Wike. He was recently in the news. What was his crime? Some Muslim enthusiasts peddled a mischievous rumor that he demolished a mosque in Port Harcourt. Within hours, this piece of misinformation has spread all over social media. Muslim enthusiasts started mobilizing and threatening Christians. They were calling for the demolition of churches in some parts of the Islamic North. Several online posts from local jihadists urged Muslims to revenge and retaliate on specific dates and places. Even a statement that Gov Wike released debunking the claim, and stating that no mosque was destroyed, did very little to douse the tension and placate these fanatics.

For the avoidance of doubt, Muslim enthusiasts have been angry with Gov Wike before now. They were upset following the governor's statement in June that Rivers state was a Christian state. So the alleged demolition of a mosque was, for them, a confirmation of that declaration.

Meanwhile, I have been trying to understand the basis of this Muslim rage and fury. Look, why are Muslim enthusiasts unhappy that Gov Wike described Rivers state as a Christian state? Where were these fellows when Gov Yerima declared Zamfara a shariah state? What was their reaction when the Muslim majority states in the North adopted shariah as state law and literally turned these states into Islamic states? What have these Muslim zealots done about the activities of the sharia police in the North?

Now, some Muslims are threatening to attack and burnt down churches in the North in retaliation for the phantom mosque that was destroyed in Port Harcourt, right? These Muslims need to ask themselves: How many 'real' churches have sharia governors demolished in the past years? How many churches have Boko Haram militants and other jihadists destroyed?

Now let us assume that Gov Wike partially or completely demolished a mosque in Port Harcourt. How is that an offense that warrants any attack or demolition of churches in the North? Are these Muslims saying that the government has no power to pull down mosques?

It is important that Muslims, Christians, traditionalists, and nonbelievers across the country understand that the government has the power to issue or withdraw licenses for the construction of churches, mosques and other religious centers. Muslims are delighted when devout governors use state funds to construct mosques in the country. They should also know that the government has the power to pull down these structures.

The government can demolish churches, mosques, shrines, temples, and other worship or meditation centers deemed to have been illegally constructed, or for some other reason considered to be consistent with the law, such as noise pollution. Some places of worship can be partially or completely demolished in the course of constructing roads or public highways or in the process of renovating or beautifying cities and towns. Aren't Muslim governors pulling down mosques and other places of worship in many parts of the Islamic North?

So Muslims threatening attacks, vengeance, and retaliation in response to real or imagined demolition of a mosque should know this: They are fanatics, and enemies of the Nigerian state.

The author has 249 publications published on Modern Ghana.