“We aren’t safe at all”: Cameroonians flee English-speaking regions

By Alphonse Tebeck in Bamenda - RFI 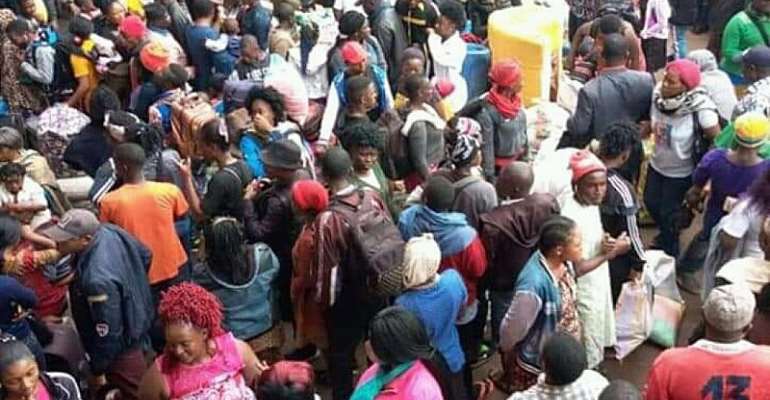 Thousands of Cameroonians have fled the English-speaking regions over the past week after separatist activists announced the region would be put on a three-week 'lockdown' beginning Tuesday.

At Moghamo bus terminal in Bamenda, the tension is palpable as a large crowd of hundreds of people are queuing, getting on buses and buying tickets.

One woman in the queue is seamstress Lariisa Bongnuy, 40, from the town of Wum about 80km from Bamenda. With her 6-month-old baby daughter strapped to her back, she looks extremely tired.

"I am going to Douala with my husband and our four children,” Lariisa Bongnuy,  tells RFI. “My husband says we have to leave Wum…so many people are being killed there.”

Bongnuy points to her oldest son sitting off to the side of the bus depot.

“He was supposed to have finished university but for three years he's been in the house doing nothing,” says Bongnuy. “These children need to go to school elsewhere; they can be killed here.”

The Anglophone crisis in Cameroon has reached a fever pitch as separatists, who have been fighting to end discrimination by the French-speaking government to create their own country, Ambazonia, have issued a 'lockdown'.

The separatists have circulated audio, video and text messages on social media, saying this is being carried out to protest a Yaoundé military tribunal ruling which sentenced 10 Anglophone separatist leaders to life in jail on 20 August.

The lockdown also serves to prevent schools in the restive regions from opening on 2 September for the 2019-2020 academic year. This will be the fourth year the schools will not reopen in the English-speaking areas.

According to UNICEF, more than 80 percent of schools are closed in the two Northwest and Southwest English-speaking regions, a situation that has kept some 600,000 children out of school for the past three years.

At the bus station, 35 and 70-seater buses are pulling out of the terminal, as Cameroonians laden with boxes, bags, mattresses, beds, kitchen utensils and food items wait to leave.

Normally, it is quite unusual to see such a large number of people in a bus station on a single day. But Anglophones tell RFI they fear for their lives as the lockdown goes into effect on Tuesday.

Also waiting for his chance to buy a bus ticket was a 31-year old trader who speaks to RFI on condition of anonymity.

"Fred" has spent the whole night at the bus station, as he has nowhere to sleep. He comes from Mbengwi and says he has been in the queue since six in the morning.

Fred expresses bitterness over the imposed lockdown and says he fears for his life, which is why he is fleeing.

"Where on earth are people asked to stay indoors for nearly one month to punish the government?” he asks. “Tell me – are we the cause of the problem? Why should I stay as a prisoner in my own home?

“I don't know what can happen tomorrow. But I'm better off going and idling in Yaoundé than putting my life at risk. The military kills us for nothing, and Amba boys are not better,” he says, referring to a group of separatists operating in the region.

Government says situation 'under control'
Speaking to the state broadcaster on Sunday, Northwest Regional Governor Deben Tchoffo said the mass exodus is actually students on holiday returning to their schools.

Tchoffo said that the security situation on the ground was also under control and the environment was conducive schools to reopen.

But during his recent back-to-school campaign events in Anglophone areas outside of Bamenda, he travelled in armoured cars with a military convoy.

In the meantime, Catholic bishops from the northwest and southwest regions have written an open letter to the protagonists of the crisis over the weekend. In the missive, led by Bishop George Nkuo of Kumbo, the six bishops urged government and separatist fighters to create an enabling environment for children to go back to school in both regions.

"All the children in the Northwest and Southwest regions deserve the right to education and to make a good future wherever they decide to make their lives,” they wrote.

The bishops noted that although the security situation in these regions still remains volatile it should not be used as an excuse to keep children out of school.

"There's hardly any country around the world were schools were closed for so many years because of insecurity. During the South African apartheid regime and the imprisonment of the leaders of the African National Congress movement, schools were not permanently closed," they added.

Local residents argue that the environment is still unsafe for them to allow their children to return to school. If Yaoundé truly wants schools to resume, as they claim, then there should be sincere and inclusive dialogue as the best way forward, the residents say.

Cameroon's President Paul Biya came to the restive regions for the first time in May on a peace mission. He had promised to engage in a formal and broad-based dialogue to resolve the unrest.

Since then, nothing has been done.
According to the UN, some 2,000 people have been killed, 530,000 internally displaced and 1.3 million in need of assistance since the unrest turned into an armed conflict in 2017.

As Fred waits at the bus depot in order to leave Bamenda, he contemplates his future.

“We aren't safe at all. I will only come back when this senseless war is over,” he says.