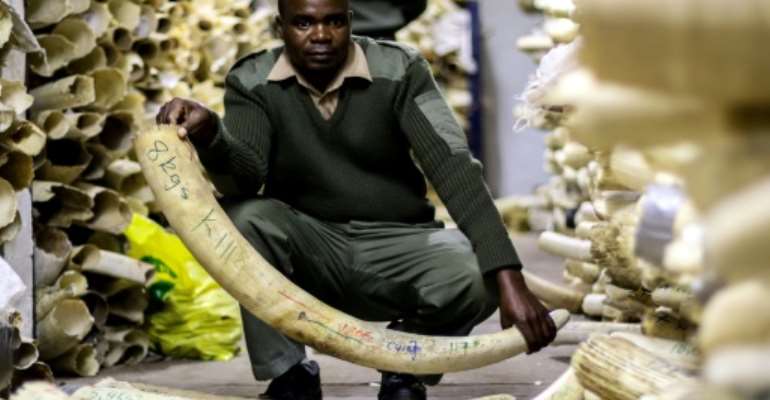 Zimbabwe and its two southern neighbours Botswana and Namibia, had requested a resumption of ivory sales to clear their stockpiles and fund conservation activities. By Jekesai Njikizana (AFP)

Global trade in ivory has largely been outlawed since 1989 after elephant numbers plunged from millions in the mid-20th century.

Zimbabwe and its two southern neighbours Botswana and Namibia, had requested a resumption of ivory sales to clear their stockpiles and fund conservation activities.

But their proposal was rejected by governments at the ongoing Convention on International Trade in Endangered Species (CITES) meeting in Geneva.

The three countries' stockpiled ivory has a combined value of US$600 million (540.7 million euros), Mnangagwa said.

"It's a lot of money we can use for big projects," Mnangagwa was quoted as saying by the government daily, The Herald, on Tuesday.

"Our wild animals are being discussed in Geneva, an irrelevant place to the animals," he said referring to the 183-country forum.

"They bar us from killing our animals for selling ivory, but they want us to protect them from being poached," Mnangagwa protested.

"Europeans have consumed all their animals, but they want to set rules for us who have managed to conserve theirs."

Southern Africa is home to the majority of the remaining African elephants where populations have traditionally been better protected and healthier.

The overpopulation of the animals has resulted in them destroying crops and killing villagers living alongside the national parks where they are found.

The ivory stockpiles come from tusks from natural deaths, confiscations from poachers and culling.

Zimbabwe has permission to carry out culling to maintain a sustainable elephant population, but it has not done so in three decades.

"The last cull was in 1987, we have not carried out any because of disapproval by the various animal rights activists," Zimbabwe National Parks spokesman Tinashe Farawo told AFP.

Zimbabwe, which has an elephant population of 84,000 against it carrying capacity of 56,000, is permitted to issue licenses to commercial hunters to kill 500 elephants every year but most of the hunters take the tusks with them as trophies, said Farawo.

On Tuesday CITES imposed a near-total ban on exporting African elephants captured from the wild to zoos.