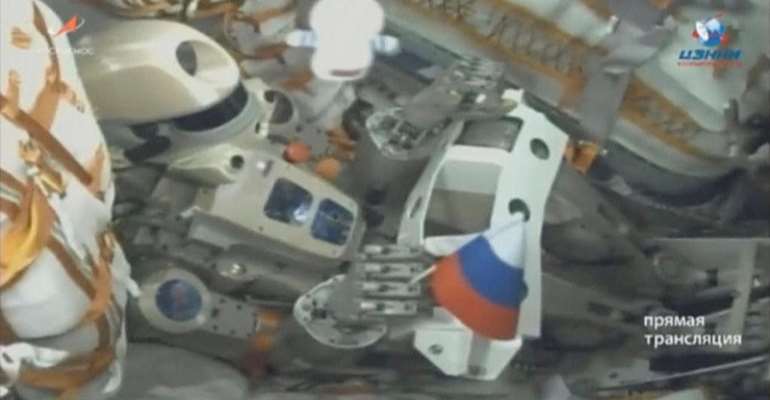 A Russian humanoid robot has shown an apparent sense of humour as it docked at the International Space Station. Fedor, the Skybot F-850, announced its landing early Monday with a joke, after an aborted attempt at the weekend.

"Sorry for the delay. Got stuck in traffic. Am ready to carry on with work," Fedor tweeted from outer space.

The robot was designed to copy human movements, including having a sense of humour, as well as to aid in dealing with high-risk tasks in space.

"Second time was a charm... the crew is up to seven," he said. There were already six astronauts aboard the ISS.

'Let's go. Let's go!'
Although usually manned, Fedor made its solo trip on Thursday in a Soyuz spaceship, launched from southern Kazakhstan, in order to test a new emergency rescue system.

During blast off, Fedor said, "Let's go. Let's go!" repeating the words of its human predecessor, the first man in space, Yuri Gagarin.

The spaceship was stocked with scientific equipment for the ISS human counterparts, including parts for the life support system. It also held food, medicine and hygiene products for the astronauts aboard, according to Russian-based Roscosmos space agency.

Fedor was unable to dock the first time around on Saturday, adding to the concerns that the Russian space programme was not as successful as it once was.

Russian flight controllers said a problem with the station, and not the Soyuz spacecraft, had prevented automated docking, according to NASA.

Spacewalks ahead
The ISS astronauts will operate Fedor by donning a robot exoskeleton that will mirror the robot's movements.

Fedor's future looks bright as it will be used for testing Federatsiya, Russia's new manned spaceship that is currently in development, Dmitry Rogozin, the head of Roscosmos told Russia's Interfax news agency. He said that Fedor will be used for outside dangerous duties, which include spacewalks.

"That's what he's being created for. We don't really need him inside the station," he added.

Fedor is not the first robot to go into space – NASA sent Robonaut 2 up to space in 2011, but was sent back to earth in 2018 due to technical issues.

Kirobo was Japan's robot who went with the first ISS Japanese commander in 2013, and even spoke Japanese.

Russia's Fedor is due to stay on the ISS until 7 September.