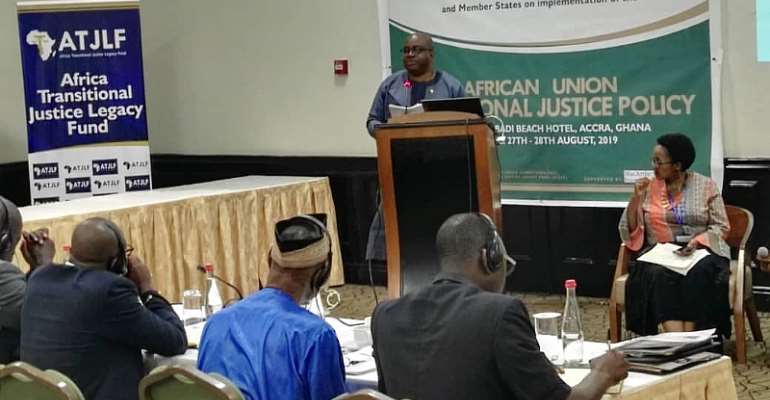 The meeting, which will end tomorrow Wednesday 28th August 2019 is the first of a series of regional meetings to disseminate the AUTJP with the aim of promoting its effective implementation in the region.

With support from the MacArthur Foundation, key government and civil society representatives from all 15 Member States in West Africa will converge in Accra to learn more about the AUTJP with a view to ensuring coherence on transitional justice interventions across Africa.

Delegates are spending two days in Ghana to map out effective implementation strategies for the AUTJP and provide states with a framework that will eventually contribute to peacebuilding, democracy building, constructive management of diversity and post-conflict reconstruction and development.

At the end of the meeting, participants are expected to have a better understanding of the AUTJ policy and are positioned to proffer context-specific solutions to countries in conflict and those transitioning from conflicts and dictatorships in the region.

Addressing participants, Mr. Emmanuel Okorodudu, who represented the ECOWAS reiterated the need for a more broadened knowledge on Transitional Justice processes in Africa.

He observed how absence or collapse of the rule of law in any state can result in violent conflict or repression which may consequentially lead to gross violations of human rights.

“Impunity is the primary obstacle to the rule of law. In Africa, examples abound on TJ processes that were deployed to either foster reconciliation or provide justice for injustices that have been perpetrated by a very long period.

He called for new approaches to previously deployed TJ system in order to come up with new skills knowledge and programmed activities to enhance and address TJ concerns of member states due to the fast challenging changes of modern-day society.

“The need arises and it is in this regard that we at ECOWAS welcome the AU-TJ policy, and this opportunity to have capacity skills enhancement on how to adopt the policy.“

On his part, the African Union’s Commissioner for Political Affairs, Ambassador Salah Hamad, recalled that on 11th February, 2019 the Assembly of the African Union Heads of State and Government at its 32nd Ordinary Session, and unanimously adopted the AUTJP without any reservations.

“This was a truly historical and epoch-making decision of our union. This policy provides clear guidelines to all the 55 member states of the AU on how best to address violent conflicts and in the process preserving the protection and promotion of human rights, guaranteeing accountability, sustainable peace, justice, reconciliation, and national cohesion and above all social harmony,” Ambassador Hamad stated.

He indicated that since the AUTJP has been adopted there is the need to redirect efforts towards three very important aspects of the AUTJ namely the popularization of the policy, effective domestication and implementation and close monitoring and evaluation of the results of its implementation in conflict prevention, management and resolution across the African continent.

“As we have argued elsewhere, an adopted Policy is a mere piece of paper if the provisions and the guidelines are not domesticated and implemented accordingly. Apart from the fact that the policy is homegrown and tailored in line with our shared values as a people, it is premised on principles that constitute the basic minimum values and standards that inform actions across all transitional justice processes,” he said.

Ambassador Salah Hamad said this is on the rationale that the transitional justice activities will address the root causes of conflict and contribute to the creation of sustainable peace accountabilities, social justice and transformative democratic socio-economic reforms without losing track of those shared values of justice.

The Attorney-General’s representative who spoke on behalf of the Government of Ghana underscored the critical role of the AUTJP with Ghana as a reference point.

"Ghana has experienced several of such transitional periods and I am happy to say that in all the good people of Ghana succeeded in charting the path of peace. In all the constitutions of Ghana, promulgated after 1966 have a part known as transitional provisions which seek to bridge the gap between the old and the new regime. Though not reconciliatory in nature, however, in 2002 the parliament of Ghana passed the National Reconciliation Commission ACT 611 which has basically been implemented to recommend appropriate redress for persons who have suffered any injury, hurts, damage, grievance or who have in other manner been adversely affected by violations and abuses of their human rights arising from activities or inactivity of public institutions and persons holding public offices in past regimes," the AG's rep pointed out.

He went on to add:

"Without a doubt, the AUTJP is a very noble one, a policy designed to include a principle of action to guide a conduct to achieve a set objective makes this meeting a very unique one, the principles to achieve peace within the context of the AUTJP in the various member states in a daunting task obviously in such transitional periods, the issues that come up is whether to break with the past and start anew or to embody the past in the new in an acceptable or reconciliatory manner."

Abuses of the past cannot be washed away; it must be confronted and dealt with to bring peace and harmony. It is only by so doing that the way forward can be peaceful. Transitional matters if well-handled obviously lead to the implementation of good governance; on the other hand, the transitional period is not well handled obviously leads anarchy along the line. It is to forestall such anarchies in our sub-region and within the AU as a whole that this important workshop is being recognized.

The workshop is to ensure that the transitional justice policy of the AU becomes more visible by finding ways to make it popular and to sensitize the whole of Africa for its successful implementation. 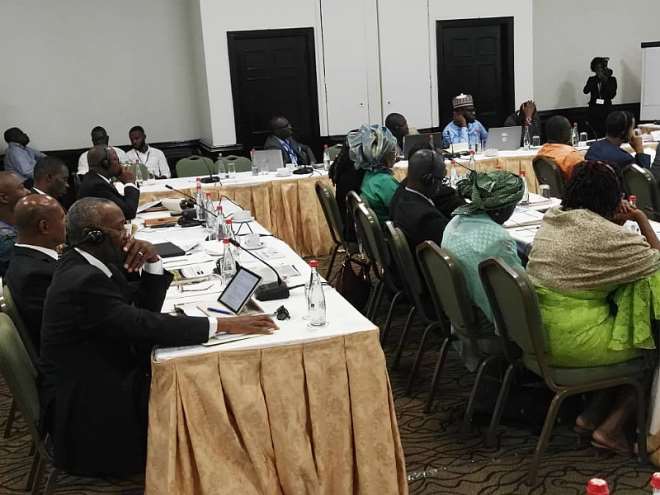 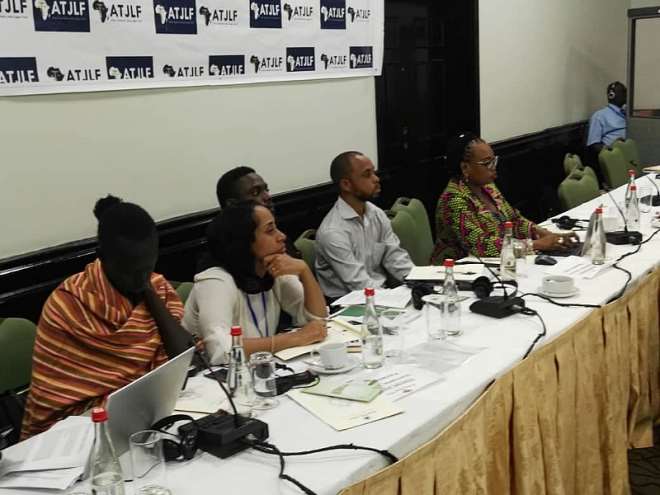