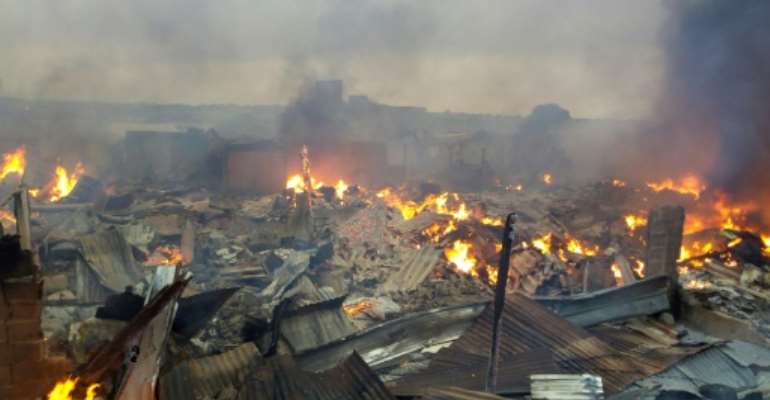 Collapsed stalls burned in the market in Bouake a day after fire broke out in the night. By - (AFP)

The main market in Bouake, Ivory Coast's second biggest city, was largely destroyed Tuesday in an overnight blaze, although there were no known casualties, an AFP correspondent reported.

It took around seven hours to bring under control, mobilising several hundred firefighters, police and troops, partly to put out the blaze but also to secure the area.

"This tragedy has most fortunately caused no loss of life," Bouake mayor Nicolas Djibo said, adding though that he was "dumbstruck by the scale of the damage".

Djibo said the fire had begun in the butchers' area of the market, which hosts hundreds of stalls and is a hub of social activity in Bouake, a city of one million people in the centre of Ivory Coast.

Some traders had been able to remove their wares in time but others wept at the sight of their loss.

Koffi Rachelle, who sold children's toys and various gadgets, told AFP she had lost everything. "I can"t even get into my shop, the fire has destroyed everything over there," she said in tears.

An inquiry into the fire has been opened, according to a police source who asked not to be named.

Experts had been studying a proposal to house the stalls in a large modern building before the latest blaze.