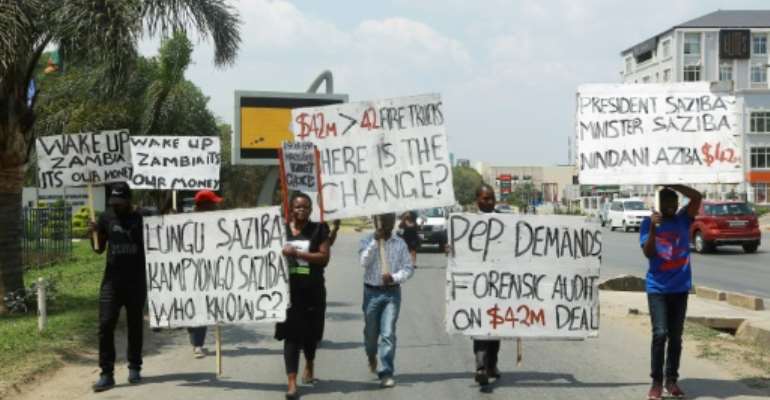 Protesters were angered over one alleged corruption case where 42 fire trucks were purchased at a cost of $1 million each. By DAWOOD SALIM (AFP)

Britain's outgoing ambassador to Zambia on Tuesday denounced "rampant corruption" in the southern African nation and said donors were right to cut back on aid.

In an usually outspoken diplomatic address, Fergus Cochrane-Dyet said reports of fraud within the government had caused international donors and foreign companies to "withhold aid and investment".

"Corruption kills as surely as any gun, depriving Zambians of life-saving government resources, water-preserving forest, intentionally-renowned wildlife and jobs that foreign companies would otherwise provide," said Cochrane-Dyet during a leaving speech at his residence in the capital Lusaka.

Zambians have grown increasingly disaffected with President Edgar Lungu's regime, which has faced several graft scandals since he came to power in 2015.

Evidence of embezzlement has surfaced, including the alleged state purchase of 42 fire trucks said to cost $1 million each.

Anti-graft activists also accuse ministers of using public money to fund their lavish lifestyles, with some ministers owning up to 40 houses while most Zambians while in poverty.

The allegations caused foreign affairs minister Harry Kalaba to resign in protest last year, citing "swelling" corruption in government ranks "perpetrated by those who are expected to be the solution."

Cochrane-Dyet said he received threats of expulsion after publicly speaking out against corruption in 2018.

Britain suspended aid to Zambia last year after a mounting row with the government over alleged misuse of social payments.

The dispute led to the arrest of former social services minister Emerine Kabanshi, whose trial is scheduled to begin next month.

Cochrane-Dyet told reporters it was his responsibility to speak candidly, and urged the government to declare Zambia's hunger situation an emergency in order to "unlock international humanitarian assistance".

Around 2.5 million Zambian have been hit by hunger following a drought that affected the 2018/19 farming season, according to official figures.

The government has so far refused calls to declare an emergency and at the weekend it capped the price of the staple maize after the drought reduced harvests.