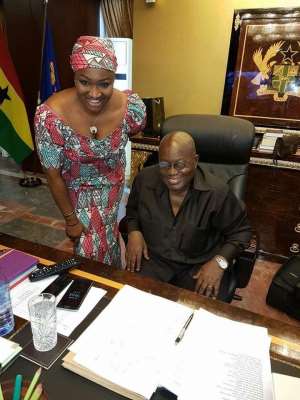 Business Woman, Philanthropist and Gender activist, Hajia Jannat Bibii, popularly called Biihi-Ma (Peoples’ Mother) has vowed to lead the NPP in the Wa Central Constituency to wrestle the seat from the NDC.

She made this known in Wa after successfully going through the party’s vetting to once again contest the seat having narrowly lost to 2016 parliamentary candidate of her party, who lost the seat to the NDC in the 2016 elections.

Branded as one of the most famous female Contractor in the country now, she awakened the constituency as the only female in the last contest which she came second. As our elders say, a chicken that will grow into a cock can be spotted the very day it was hatched. Hajia Bibii has always been an inspiration to many, especially women and the youth in her constituency and beyond. Her vibrancy has endured the heart of many floating voters and even members of the NDC.

Addressing delegates and party supporters after the vetting process, Jannat Bibii said “Education, Youth & Women Empowerment, Poverty Reduction, Jobs, Jobs and Jobs for my constituents will be my main priority”.

She continued, “I am confident that I will be elected this time around to redeem my people from the incompetence of the NDC in the Wa Central constituency. My confidence is based on the numerous assurances and support I have received regularly from the delegates and good people across the 150 polling stations. I have been there before. But unfortunately, on my part, the delegates decided otherwise. A lot has transpired through internal upheavals. Relationships need to be repaired, alliances need to be forged, mind blowing strategies to win the seat & stay in power need to be provoked, party rebranding, positioning and reorganization ought to be our main engagement going forward. And I am convinced our discerning delegates will reward my selflessness, hard work, commitment and loyalty over the years.”

About Jannat Bibii
She was born in 1978, a third child among the siblings of five. Her father is Mr. Malik Bashir (JB), who is a former constituency executive of the NPP and currently a member of the NPP Regional Council of elders. She is a business woman and philanthropist. And one can say she is the most famous female contractor in the country currently. She holds a Bachelor of Communication degree from Islamic University College of Ghana, and married with three kids.

Indeed, Jannat Bibii (JB) have proven to be resourceful, efficient, effective, trustworthy, team player, experienced, competent and the priced asset that the Wa Central constituency badly need to give the needed direction to wrestle power from the incompetent NDC. She understands our party from the bottom to the top.

She is the unifier, formidable force, game-changer and that grassroots appealing candidate the Wa Central NPP have been longing for.

Also, BIIHI-MA, as she is affectionately called, is not new to national politics within the NPP. She has the national clout and appeal to bring the needed development to the constituency. Her relation and access to his H. E the President of the Republic, H. E the Vice President, the National Chairman, Regional Chairman, other party and government officials is second to none.

She will leverage on that to bring the needed development to the constituency and the region at large. Experience indeed they say is the best teacher; and that is exactly what Hajia Bibii brings on board.

She believes that a little effort is the best replacement for excuses. With hindsight, she has been commited to the development of the constituency after our 2016 victory even without governmental appointment.

Hajia Jannat Bibii also adopted several polling stations, renovated the party constituency office, organized and funded several campaign programs and other activities of the party prior to the 2016 elections and thereafter. This and many others have endured her to be loved by all.

The NPP and the Wa Central constituency has gained considerably from the dexterity of this affable young woman and stands to even gain more and in a better fashion if she is given the mandate as parliamentary candidate and subsequently as a member of parliament.