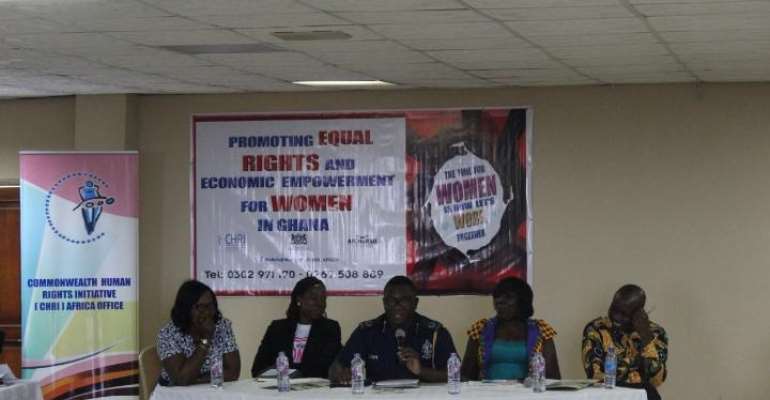 A one-day workshop under the theme “Promoting Equal Rights and Economic Empowerment for Women in Ghana”, has been held for selected Police officers in the Kumasi Metropolis.

The workshop which took place on Wednesday, 14th August at the Crystal Rose Ambassador Hotel, Ahodwo, in Kumasi was organised by the Commonwealth Human Rights Initiative (CHRI) in collaboration with the Africa Centre for Human Rights and Sustainable Development (AfCHuRSD) and the Ashanti Regional Office of the Commission on Human Rights and Administrative Justice (CHRAJ) with support from the Royal Netherlands Embassy in Ghana.

The Police Officers were taken through topics such as human rights, gender rights, empowerment of women, gender-based violence, laws governing women’s rights, implications of gender discrimination, among others.

Madam Mina Mensah, the Head of the CHRI’s Africa Office expressed happiness at the massive attendance of the selected Police Officers from the Kumasi Metropolitan area.

She explained that the training is meant to increase their capacity of the law enforcers to improve service delivery taking cognisance of issues of equal rights for women which should be a key part of their work.

According to him, the workshop will not only provide information but it would help to boost the operational capacity of the officers.

ACP Adjem said although the workshop was about women’s rights, ultimately it is about the rights of all persons as enshrined in Chapter Five of Ghana’s 1992 Constitution.

“I think this course prescribes all these three pillars. We are supposed to be looking at the rights of women and as we do that we are also looking at the rights of all persons. Chapter Five of the 1992 Constitution tells us what we ought to do as Police Officers and I know that you are all aware of this. You also know that policing thrives on information; information not only for investigative purposes but in the way we understand the law, the way we follow procedure and of course the way we do the right thing,” ACP Adjem stressed.

He advised the officers to share the information acquired with their colleagues at their various stations to promote attitudinal change in the handling of women’s issues.

“I am sure we are all aware of the disclosure rules that are now compulsory. So it tells us that everyday something new comes in, so as we are here today, this tells you that this is information you need and would be useful for your jobs. It is not only limited to you, you are supposed to learn it well and go and share it with your colleagues. People have told us that we [Ghana Police] are using last Century methods to handle contemporary issues so let us study the new things and make ourselves relevant,” he added.

Mr Theophilus Ayugane, the Policy Officer (Gender/Human Rights Governance) at the Royal Netherlands Embassy indicated that the Dutch government has been a long-time supporter of gender-related issues.

"Gender rights is a core area of human rights so it was gratifying to see that there were more female Police Officers present at the workshop than males," he added.

He urges that whatever the officers learn at the capacity-building workshop should reflect in their work.

Madam Bernice Naah, the CEO of AfCHuRSD, said the workshop is part of a wider project in Accra, Tamale and Kumasi to empower and safeguard the rights of women.

She revealed that preliminary studies undertaken in Kumasi and Tamale show that women’s issues needed serious attention and so community leaders including the Police need to be empowered to uphold human rights especially women’s rights.

During a presentation, Ms Mercy Larbi, the Ashanti Regional Director of CHRAJ, took the officers though the various human rights laws in Ghana and the forms of human rights violation against women.

She said all rights mentioned under the Constitution, Acts of Parliament and International protocols are applicable to everyone.

Ms Mercy noted that however, women, children and people living with disability are generally considered as vulnerable groups which require serious attention towards them.

She explained that there are some laws and rules in many institutions in Ghana that are discriminatory against women.

Ms Larbi cited the cases of the Ghana National Fire Service (GNFS) female staff who were dismissed for getting pregnant within three years of being employed by the GNFS and the Nursing Training College trainees in Ashanti Mampong who were prevented from writing their final examinations because they got pregnant.

She said all such laws were discriminatory, offended Ghana’s Constitution and also broke international laws and Conventions that Ghana had subscribed to.

“Pregnancy is not a disease, unless the Doctor says you are not fit,” Ms Larbi advised.

The Ashanti Region human rights Ombudswoman also took the Police Officers through the types of gender-based violence and the forms of sexual violence in Ghana.

She stressed that not all discrimination is negative such as Affirmative Action, which is positive and serves as a way of compensating for social injustice against women.

Ms Larbi added that women and men are equal before the law and shall have the right to equal protection.

According to her, women stand a greater risk of experiencing all forms of violence both outside and in the domestic setting. Consequently, if any such violations of these rights occur, the affected person can report to the Labour Commission or CHRAJ for redress. 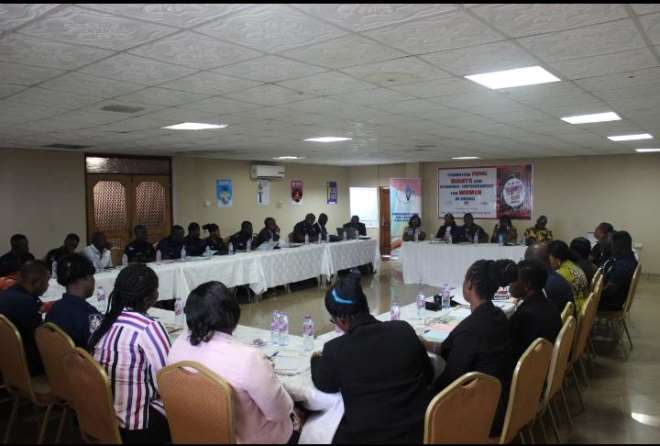