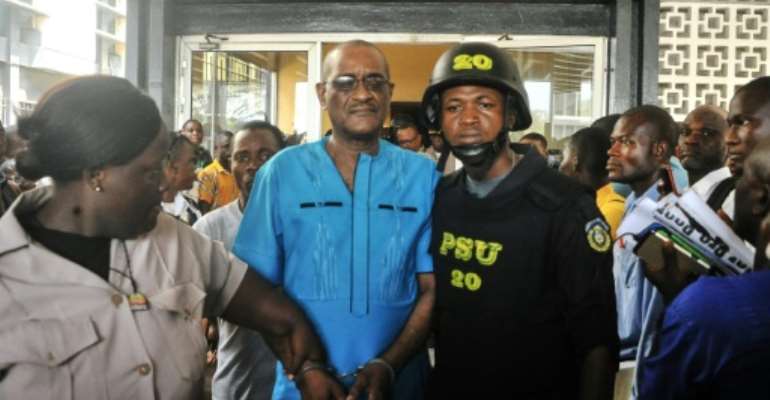 Charles Sirleaf, son of former Liberian president Ellen Johnson Sirleaf, is among the five indicted over the currency scandal. By Zoom DOSSO (AFP/File)

Five former Liberian central bank officials, including an ex-president's son, have pleaded not guilty to charges of money laundering and "economic sabotage" in a scandal over millions of dollars of newly printed cash.

A court in Monrovia, the capital of the impoverished West African country, said the group -- accused of printing surplus banknotes worth 2.6 billion Liberian dollars ($16.3 million, 14.4 million euros) without authorisation -- all asserted their innocence on Monday.

Liberia's President George Weah vowed to tackle corruption when he came to office in January 2018, but has recently faced protests from citizens angry about graft, living standards and spiralling inflation.

The Central Bank of Liberia is at the centre of a probe into the cash -- materialised between 2016 and 2018 -- which prosecutors say the ex-officials cannot account for.

Charles Sirleaf, son of former president and central bank chief Ellen Johnson Sirleaf, is among the five indicted on charges that also include criminal conspiracy.

What exactly happened to the money remains unclear, with a report by the US investigative agency Kroll Associates saying the money arrived at the central bank but that there were failings at each stage of the process.

Ellen Johnson Sirleaf, Liberia's president between 2006 and 2018, is a joint winner of the 2011 Nobel Peace Prize for her work on women's rights during the country's civil war.