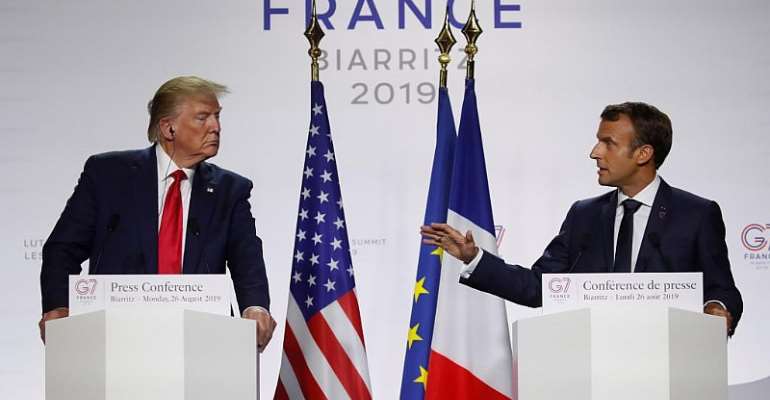 France's President Emmanuel Macron and his US counterpart Donald Trump have praised "real points of convergence" on Iran, trade and fires raging in the Amazon, at the close of the G7 summit in Biarritz. The two leaders also said they had reached a deal on the French digital tax on tech US firms.

"We have managed to find real points of convergence, unprecedented, very positive, that will allow us to go forward in a very useful way," said Macron at a joint press conference with Trump in southwest France.

Trump was equally effusive, saying the French president did a 'fantastic job' at the summit.

"This was a very special, a very unified two and a half days and I want to thank you," Trump said.

Macron hopes for US, Iran meeting
Macron said at the G7 summit that he hoped Trump and Iranian President Hassan Rouhani would meet in the next few weeks. The G7 leaders reaffirmed that Iran needs to meet its nuclear obligations. The US left the nuclear accord in 2015, and there was hope expressed that the two nations might be able to have a diplomatic breakthrough.

While Trump said he was willing to meet with Iran, he said if it does not want to be a “good player” then it would have to deal with “very violent force.”

Macron spoke on a more positive level, saying that he would like to help the two countries coming closer together on this issue, perhaps a new agreement can be negotiated.

Progress “may not be immediately,” said Trump, but "I think he's going to want to meet. I think Iran wants to get this situation straightened out," he added.

Deal on Gafa tax
Another positive milestone reached at the G7 summit was the agreement between France and the US on a French technology tax on internet companies.

After Macron revealed earlier this year that under the new Gafa tax, tech companies would have to pay three percent on any money earned on digital services in France. He said that those companies who paid the tax could deduct it once a new international deal had been reached on taxing internet companies.

Trump had earlier threatened to levy tariffs if France went through with the law.

Trump not budging on climate change
Although climate change, and specifically the out of control fires in Brazil's Amazon Rainforest was high on the agenda, Trump said that he didn't want to lose US wealth on 'dreams and windmills'.

Meanwhile, Macron announced that the G7 is giving 20 million euros in aid money to help combat the fires in the Amazon.

"France will do so with military support in the coming hours," said Macron, without elaborating.

After environmentalists called attention to the fact that sub-Saharan Africa has more fires than Brazil, he said he would consider launching an international campaign to help them, too.

"The forest is also burning in sub-Saharan Africa,” Macron said on twitter. “We are studying the possibility of launching an initiative similar to what we just announced for the Amazon," he added.

Trump skipped the Monday meeting on the environment.