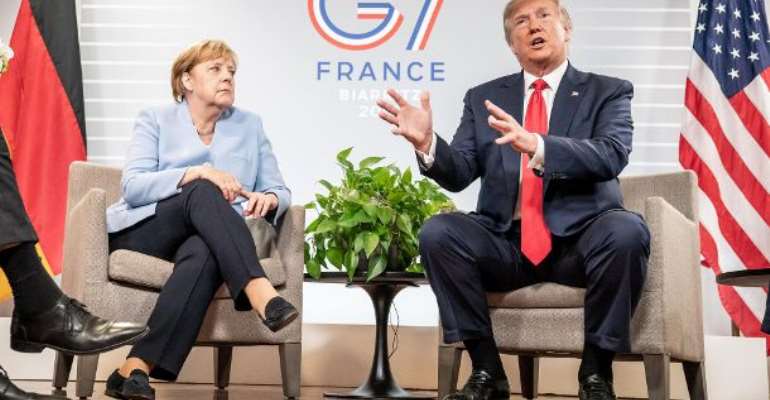 The meeting between Trump and Merkel at the G7 summit has begun. Despite many controversial issues, the US President first of all complimented the Chancellor. All information on the news blog.

Trump compliments Merkel
Donald Trump has showered Chancellor Angela Merkel (CDU) with praise. "She is a brilliant woman," said Trump. She understands everything exactly and knows a lot before most others know, Trump praised further.

Merkel promotes start of negotiations for customs agreement with Trump

Chancellor Angela Merkel has urged US President Donald Trump to start negotiations with the EU on the abolition of customs duties on industrial goods. Even if one is of the opinion that other things need to be on the agenda, one should start the talks. "I hope that this can happen," Merkel said on Monday after a meeting with Trump on the fringes of the G7 summit in Biarritz.

The US has so far blocked the start of negotiations because it wants to talk about trade in agricultural products. From an EU perspective, however, this is currently out of the question. France in particular fears severe losses for its farmers if all import restrictions are abolished.

$20 million for burning Amazon rain forests
In the fight against the devastating fires of the Amazon rainforest in South America, the G7 states have pledged emergency aid of 20 million US dollars (around 17.9 million euros). This was said by Chilean President Sebastián Piñera on Monday in Biarritz alongside France's Head of State Emmanuel Macron.

In a second step, an Amazon initiative is to be launched at the UN General Assembly in September. Macron said that this should also involve reforestation. He had put the topic of forest fires on the agenda of the meeting of the major industrial nations (G7) at short notice.

Brazil is currently experiencing the worst forest fires in years. According to the Brazilian space agency INPE, the number of fires has risen by 83 percent since the beginning of the year compared to the same period last year.

Merkel praises progress in Iran diplomacy
Shortly before the end of the G7 summit in Biarritz, Chancellor Angela Merkel (CDU) drew a positive balance. She said that the international community had taken a big step forward in Iran policy. The circle of G7 states is now firmly committed to overcoming the crisis surrounding Iran through dialogue. This is being done in coordination with the United States of America, that is a lot.

Merkel, however, warned against premature hopes for an early solution to the Iran conflict: "This is an incredibly fragile and difficult process," she said. It won't be easy.

The Chancellor also said that the G7 leaders in Biarritz had exchanged views on other trouble spots such as Syria, Libya, Ukraine and the Sahel zone. I am very satisfied. The value of such a summit also lies in the opportunity for uncomplicated bilateral meetings: "Otherwise you would have to be away for many days and travel in order to manage all this".

The next G7 summit is expected to take place in Miami. US President Donald Trump announced that the meeting of leading economic powers would probably take place only five minutes by car from the airport of the metropolis of millions in southern Florida. There is his estate "National Doral", a holiday resort with a golf course. Next year, the USA will take over the presidency of the G7 from France.

Trump emphasized that there is no final decision on the venue yet. He merely said that it was a large site where each delegation would have a building with 50 to 70 rooms. "It is a great place," he said.

Axios reported last month that the Trump National Doral Resort in Miami was on the shortlist. It is one of the president's golf clubs - but almost 20 minutes by car from the airport. There is no date for the summit yet.

Trump has not yet given up the hope that Russian President Vladimir Putin will also attend the summit in the USA. "We will see what happens," he said. On Sunday, Trump had not found a majority in the G7 circle in favour of turning the G7 into a G8 again with Russia. However, he stressed that this was only the current state of affairs. Apart from the USA and France, Germany, Great Britain, Japan, Canada and Italy belong to the G7 group.

Trump compliments Merkel
Donald Trump has showered Chancellor Angela Merkel (CDU) with praise. "She is a brilliant woman," said Trump. She understands everything exactly and knows a lot before most others know, Trump praised further.

When asked whether Trump was worried that Merkel might soon be the only woman of the G7 bosses to step down, Merkel insisted directly. "I'm still here," the Chancellor said this in English. Trump strengthened her back: "She could surprise you," he said to the journalists. He would be careful with such speculations.

The meeting of the two with the press was very relaxed, both laughed and seemed relaxed. In the past, the Merkel meetings took place.