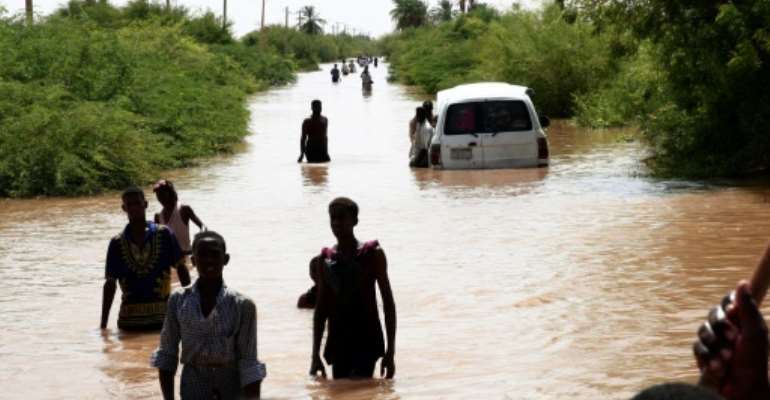 Sudanese people walk a flooded road in Wad Ramli village on the eastern banks of the Nile river. By Ebrahim HAMID (AFP)

Days after a devastating flood swallowed up his village, Alsediq Abdelqader bulled his truck through the waters in a desperate attempt to locate his small house north of the Sudanese capital.

Flash floods from the Nile inundated his home last week in Wad Ramli village on the eastern river bank, expelling him and his family who managed to clamber aboard a ferry to the nearest dry land.

His drive through the flash floods was not easy as he had to avoid floating mattresses, house appliances and broken tree branches.

"My entire home is destroyed," said the 57-year-old. "I have lived all my life in this village and I have never seen a flood like this before."

"I'm struggling to recognise my house and trying to identify it, as some others have done, by the trees around it."

His home is among thousands destroyed or damaged by the floods that struck at least 15 states, affecting nearly 200,000 people across Sudan.

The worst hit area was White Nile state in the south.

About 62 people were killed and nearly 100 injured overall, said the official SUNA news agency quoting a health ministry official as saying the crisis "did not reach the level of being declared a disaster."

Authorities dispatched lorries and boats to wade through the thick water to rescue families and salvage their furniture and valuables.

But Abdelqader was among the less fortunate, unable to find their belongings.

"I have not managed to recover any of my furniture or belongings. My family is now staying with relatives in a nearby village," said Abdelqader.

On the main road outside Wad Ramli, piles of sodden furniture are strewn about as homeless families shelter in dozens of make-shift tents.

The crisis comes as Sudan ushers in a political transition to civilian rule.

A prime minister and a civilian majority ruling body are to oversee a three-year transitional period following the ouster of veteran ruler Omar al-Bashir in April. 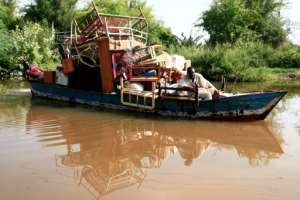 The UN says the crisis is expected to drag on until October.

"We have not been able to survey the number of houses affected in Wad Ramli due to the rising water levels," said Farouk Ahmed, supervisor of a Red Crescent aid team.

He estimates the village alone had about 6,000 residents.

And as Wad Ramli inhabitants reel from the floods, residents of nearby villages are bracing themselves for water levels to keep rising.

In Wawesi Gharb village, about half a kilometre (500 yards), 35-year-old farmer Sami Ali says he is running out of ways to roll back the water threat.

"We placed piles of sandbags around houses to reduce the damage in case we were flooded especially after the water surrounded our village from all sides," he said.

Another resident, 24-year-old Hozeifa al-Ser, expressed fear of an outbreak of diseases especially as "mosquitoes and flies are hovering everywhere".

'We will go back'

Mobile health clinics were set up oustside the village to serve Wad Ramli but aid workers say medicine and food are in short supply.

In the tents, hundreds of villagers are pondering ways return to their lives.

Along with her two sisters and their families, Nafisa al-Saeed said they plan to go back home after the water recedes. 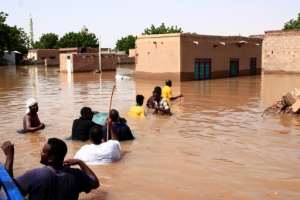 "We lived in this village all our lives. We will have to go back and rebuild our houses. Authorities just have to build flood barriers but we will not leave this place," she said.

But 19-year-old Shehab al-Din Mohamed says he lost his documents and identification cards as well as university application papers.

"The academic year will start soon and I have no idea how I would submit my documents after I lost everything," he said.

"It seems like we will be living here (in the tent) until October, and I have no idea what to do."