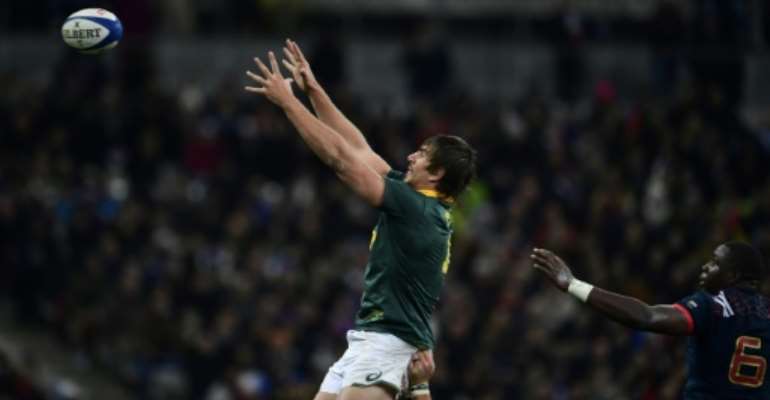 Lock Eben Etzebeth denied pointing a gun at a man outside a bar and was included in South Africa's World Cup squad. By Martin BUREAU (AFP/File)

Eben Etzebeth, who has denied allegations of pointing a gun at a homeless man at the weekend, was included Monday in a surprise-free 31-man Springboks Rugby World Cup squad.

The 27-year-old lock was accused on social media of insulting, assaulting and pointing a gun at a homeless man Sunday in the coastal town of Langebaan, 135 kilometres (84 miles) north of Cape Town.

"It is completely untrue and unfounded to claim that I physically or racially abused anyone in Langebaan as has been reported on social media," the 78-cap star told the South African media.

"Multiple witnesses can corroborate that. I am and will always strive to be a true ambassador to this beautiful rainbow nation and the sport that I love."

A statement from national body South Africa Rugby said "we have spoken to Eben and he categorically denies any physical or racial abuse on his part as has been alleged in social media".

"(SA Rugby) has no tolerance of acts of violence or racial abuse. We will co-operate with the authorities in any way necessary.

"Our Rugby World Cup squad will have no place for anyone who transgresses those principles."

Coach Rassie Erasmus said: "We have planned and trained to be competitive at the Rugby World Cup and the work we have done and the performances to date this year have put us into a good space."

Trophy-holders New Zealand, Australia, England, Ireland, South Africa and Wales are considered the strongest contenders. Among them, the Springboks are the only side unbeaten since July.

"Rugby World Cups are usually decided by small margins -- a foot in touch here or a referee's call there -- but we have a very good squad that has grown into a tight unit over the past few months.

"I am very happy with the squad we have been able to select. We have been developing this squad since the start of last season and we have a good balance of established experience and some exciting youth.

"We set out with the goal of growing the depth of the squad and I am confident that any of this 31 can step into a play-off match at the Rugby World Cup and deliver an outstanding performance."

Siya Kolisi will captain the squad and is one of a record 11 black players chosen for a South Africa World Cup squad, up from eight who went to the last tournament in England and Wales four years ago.

Of the 32 players who attended a camp in Bloemfontein last week, Toulouse flanker Rynhardt Elstadt lost out to Lions' Kwagga Smith in a contest for the fifth back row position.

South Africa leave for Japan on Friday and will play the World Cup hosts on September 6 ahead of a mouth-watering Pool B opener against defending champions New Zealand 15 days later.

The Springboks also face Namibia, Italy and Canada. The All Blacks are expected to fill one of the top two pool positions and qualify for the quarter-finals.