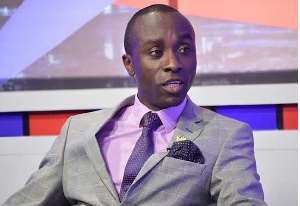 Mr. Bempah’s accusation was in a response to Kevin Ekow Baidoo Taylor, a social media commentator and host of ‘With All Due Respect – Loud Silence Media’, recent description of Former President Rawlings as a “puppet on a midget’s lab” because he(Rawlings) have been quite on the numerous corruption allegations under the Akufo-Addo led government.

According to the Director of Communication for Ghana Gas, Mr. Mahama is behind the verbal abuse of Mr. Rawlings because he (Rawlings) has not met the expectations of the former administration.

“Kevin Taylor and his sponsor John Mahama want Rawlings to speak about corruption in Akufo-Addo's government? How convenient! To this end Rawlings is insulted and verbally abused simply because he has not met their expectations?

Is that the man Kevin Taylor is abusing Rawlings for, or the mere fact that Mahama is doling out $20,000 monthly payment to him? Isn't it interesting that John Mahama and his followers too are talking about corruption? This man is indeed lucky he's walking a free man” he wrote.

Mr. Ernest Owusu Bempah, who is a known loyalist of the Rawlingses said the record of Former President Rawlings in the fight against corruption cannot be disputed compared to Mahama who he claimed institutionalized corruption.

Below is Ernest Owusu Bempah’s full write up:

With all due respect to all the right thinking people of this country, let me say without any shred of doubt that Kelvin Taylor has now gone from being an imbecile to a mentally unstable character.

This sociopath has the effrontery to open his stinking mouth to call JJ Rawlings a puppet of a midget, simply because he expected JJ Rawlings to speak out against some so-called corruption issues under the current regime.

Kevin Taylor and his sponsor John Mahama want Rawlings to speak about corruption in Akufo-Addo's government? How convenient! To this end Rawlings is insulted and verbally abused simply because he has not met their expectations?

If Rawlings is a puppet of a midget, who's Mahama? A gay partner to Kelvin taylor?

I might be wrong but I think we need to root out this son of a harlot and self-acclaimed vanguard of our society from the street and keep our amazing country safe from his traitorous ideas and behaviors.

Kevin Taylor, a good for nothing hustler is verbally attacking JJ Rawlings for Mahama? Mahama who has never achieved anything for himself in his entire life except to loot this country dry, institutionalized corruption and the destruction of our politics with monetization?

Mahama who only made it to the top by mere coincidence? By the mere fact that he got to the presidency by the death of President Mills? A death that has Mahama's hands written all over it?

Is that the man Kevin Taylor is abusing Rawlings for, or the mere fact that Mahama is doling out $20,000 monthly payment to him? Isn't it interesting that John Mahama and his followers too are talking about corruption? This man is indeed lucky he's walking a free man.

To those who care to know, Rawlings is undoubtedly one of the greatest leaders this country has ever known. His achievements and fight against corruption is absolutely unchallenged.

The average Ghanaian know JJ Rawlings as a man of integrity. He came to power and never amasses wealth as compared to the corrupt John Dramani Mahama who organized and institutionalized corruption.

President Akufo-Addo on the other hand is a BLESSING to Ghana. His leadership style, finesse, character and statesmanship is way above the equal of the dead GOAT Mahama that Kevin Taylor so cherishes and adore.

Ghana's economy under President Akufo-Addo is strong, prosperous and our country is respected as never before. That's why the corrupt and incompetent Mahama and his followers like Kevin Taylor has lost it entirely and with no arguments besides the personality attacks.

I must say that I do believe this Kevin Taylor boy and his backers are among the most evil and hateful people I have ever seen. There is no place in our nation for these kind of people.

Instead of them playing their role as credible opposition, they are wasting their time with HATE speech.

We the loyalist of Akufo Addo and Jerry John Rawlings will not sit aloof and allow a social media armed chair critic, a mere Caricature, misfit and a son of Jezebel, who was born out of prostitution to attack our great leaders just to suit his pay masters' political whips and caprices.

It is time the youth of ghana rise up against such incorrigible characters whose stock in trade is to live on the largesse of stolen public funds of crooked former president.