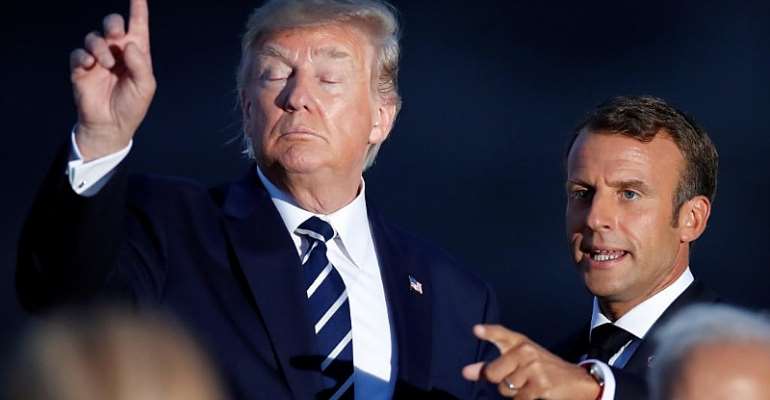 The crucial question on Monday, the last day of the G7 summit in Biarritz, is to what extent the ultimate agreed statement will match the various hints that have been circulating – what difference will talks in Biarritz make to the blazing rain forest in South America, or to Iran's nuclear future?

The global leaders gathered in Biarritz have agreed to provide 20 million dollars to finance the sending of fire-fighting planes to South America. Which is good news. But they don't appear to have done much to address the underlying economic problems that make burning rain forest trees such a profitable business.

Trump tweets his way to the exit
US president Trump is delighted with the progress of trade talks with China, describing them as “more significant” than at any previous stage.

World markets have been going backwards as the trade war between the two biggest economies has deepened. Maybe Trump has finally learned that there's no room for unilateral action in the global economy.

What he actually said to explain the improvement in the trade talks climate was that the US was doing well while China was "losing millions of jobs".

Asked what he plans to do next, the American leader proclaimed: “I think anything is possible.” Which is very helpful.

That caused the Asian stock exchanges to go downhill late last week, with the Chinese currency, the yuan, hitting an 11-year low.

Now the top trade negotiator, and Chinese vice premier, Liu He, says his government is firmly opposed to any escalation of the trade war.

An 11-year low will do that to even the toughest of negotiators.

Some are more unified than others
Then The Donald announced that the G7 leaders were on the brink of agreement on the Iranian nuclear question. He spoke of a “great unity” between the various heads of state.

German Chancellor Angela Merkel was having none of that. She quickly poured cold water on the idea that the divisions which have basically seen Trump and Israel contradict the rest of the world were about to vanish.

“We still have some way to go,” was Merkel's diplomatic way of putting it.

What Trump meant is that all agree that Tehran should never become nuclear armed. But the crucial question concerns the terms under which Iran can continue to advance its nuclear power sector.

France and Germany out of step
Something Chancellor Merkel is sure about is the need for a rapidly wrapped up trade deal between Europe and the United States.

France is not so sure.
Merkel might have been spooked by the cosying up at the G7 meeting between Trump and UK PM Boris Johnson, with a view to a post-Brexit deal between London and Washington.

And Boris got a diplomatic dirty dig from Europe for suggesting that, if there's no deal on the Brexit divorce before the 31 October deadline, London will walk away without paying a centime.

A European Commission spokesperson was quick to point out that he UK will have to pay the 49 billion euros it owes Europe, whatever happens. And there'll be no trade deal with the 27-member bloc until that debt is honoured.