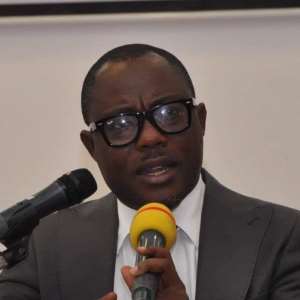 Professor Ransford Edward Gyampo of the Political science department of the university of Ghana has lamented the growing trend of famous and popular characters becoming politicians and winning elections purely because they are popular.

In a Facebook post, the professor intimated that voting for comedians, actors, musicians, football icons without they proving their ability to adequately represent the constituent will eventually prove detrimental not only to the nation but the Electoral fortunes of the very political parties who put them them forward when the constituents revolt.

Professor Gyampo wrote:
"1. African Elections thrive on fame and popularity, rather than competence. To develop, we don't need popular people. We need those who have track record of achievement and competence in managing their own lives and private professions. We need people who appreciate and understand the dogmatic ideals of representation, and have the canons as well as commitment, to act in a manner responsive to the interests of constituents when elected.

2. We must be sure that comedians, footballers, actors, musicians and all other people who have won our hearts and admiration, have what it takes to serve our interest before making a decision with respect to giving them our mandate.

3. It is a complete display of ignorance to jubilate over the election of a famous or popular person, without assessing the person's capacity to comprehend the ideals of representation, and potential to serve his constituents in a manner that breeds development.

4. Political parties must by now move away from their "election-focused posturing" to embrace the ideals of representation. In this regard, they must be selfless enough in choosing candidates who will not only win elections, but have what it takes to serve and improve the physical quality of life of constituents. This way, the candidate will always retain his/her seat.

5. Selecting a candidate who can win an election is not the same as selecting a candidate who can provide adequate representation and serve constituent needs. There are two categories of candidates. There are those who can win the election, but will be deficient in promoting constituent interest. The selection of such people, will ultimately hurt the future electoral fortunes of the party, even if they win elections today, as voters will soon revolt against them for their deficiency in representation. There are also those who can represent adequately, but have no confidence and resources to make themselves "winnable candidates". As agents of development, parties must look out for this latter group, cajole, groom and select them as candidates for elections. This choice is politically sensible as it will benefit both constituents and the party.

6. We have voted for people we "like" for far too long without questioning their ability to perform. Many Liberians have regretted today for their choice, as they have painfully realized that football icons cannot necessarily be governance icons.

7. In Plato's conception of justice within the state, he had a place for everybody in society. Producers had to be producers. Guardians had to be guardians and only Philosopher Kings had to rule.

8. Our efforts to fight the quagmires of poverty and under-development will come to naught, if we do not insist on quality representation. Quality representation may potentially be sacrificed if we choose fame without scrutinizing competence in any election.