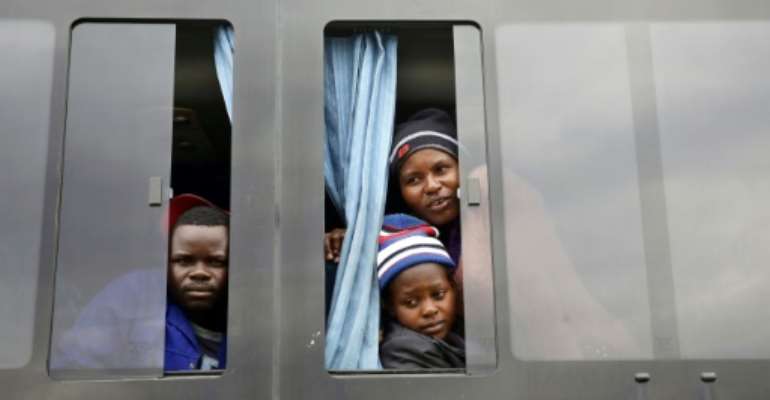 Xenophobic attacks on foreign nationals have in the past forced people to leave the country, like these Zimbabweans. By RAJESH JANTILAL (AFP)

Dozens of truck drivers in South Africa have died in attacks against foreigners since March 2018, Human Rights Watch said on Monday, calling for stronger protection of foreign workers.

The report was released after a recent spate of xenophobic violence fuelled by economic decline and record unemployment in Africa's second largest economy.

A South African truck owners' association quoted by Human Rights Watch (HRW) reported 75 such incidents since March this year, 15 of which were independently confirmed by the watchdog.

They include the deadly stabbing of a Zimbabwean driver and a petrol bomb attack on another Zimbabwean national in the coastal city of Durban, where a spate of violence against foreigners displaced hundreds earlier this year.

"The South African authorities are neither protecting foreign truck drivers against violence nor conducting effective investigations into those credibly implicated in attacks," Mavhinga said.

Labour ministry spokesman Makhosonke Buthelezi told AFP that his department was not aware of the report, but the government had appointed an inter-ministerial committee to look into the issue and held several meetings with employers and truck drivers in Durban.

"It is not true to say [the] government is not doing anything," said Buthelezi. "Whether it is enough, we can only judge later."

Transport Minister Fikile Mbalula said after an interministerial meeting in June that the crisis was caused by an "oversupply of foreign drivers in the industry", many of whom are undocumented.

The latest population census in 2011 shows that numbers spiked in the previous decade, with nearly half of international migrants having moved to South Africa between 2005 and 2010. An unknown number of the migrants are undocumented.

"[Employers] prefer [foreign truck drivers] because they can work long hours at a much cheaper cost, so they tend to exploit them," Buthelezi said.

Immigrants bear much of the anger about chronic unemployment and limited economic gains made by poor black people since white-minority rule ended in 1994.

Sixty-two people were killed in a wave of xenophobic violence in 2008, and at least seven in a renewed outburst in 2015.