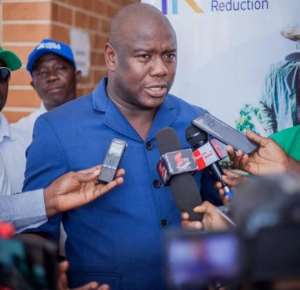 He said President Akufo-Addo’s flagship programmes such as the ‘Planting for food and jobs’ and the One Village One Dam,' will boost the local economy of the region and the country as a whole.

Alhaji Farouk Aliu Mahama, the founder for Partnership for Poverty Reduction (PPR) was speaking at the 5th northern investment conference in Tamale on Wednesday, August 22, 2019.

It was on the theme, “Celebrating Peace and Unity For Accelerating Development.”

He said without peace there can never be development, and thus urged the people of the region to embrace peace to attract more investors into the area to create jobs for the youth.

He also commended the Yaa-Naa for his fatherly role in ensuring that there is absolutely peace in Dagbon.

Alhaji Aliu Mahama was later honoured for his outstanding humanitarian support to the good people of Yendi, and the Northern Region at large.

The 5th edition of the Northern Business Excellence Awards night on August 24, recognized Alhaji Farouk’s significant contribution to progressive politics in Yendi, where he continues to play a critical role in ameliorating the plight of the people through providing agricultural inputs for farmers, support for the education of the needy, empowering women and youth employment.

Among other things, Alhaji Farouk Aliu Mahama through his Foundation, Partnership For Poverty Reduction( PPR), has carried out a number of philanthropic gestures in critical areas of the Northern Region.

The Northern Business Excellence Award is a component of the Northern Ghana Investment Conference to honour individuals and organizations that demonstrate the core value of business excellence, product excellence, sustainability and commercial success in their respective sectors annually.

In November 2018, Alhaji Farouk Aliu Mahama, visited the Palace of the Westminster House of Parliament, United Kingdom, as part of activities marking the Black History Month celebration in the UK.

Farouk Aliu Mahama, a business executive, who aspires to be a Member of Parliament (MP) for the Yendi Constituency delivered a speech as a guest speaker at the 6th edition of the celebration.

Born on April 27, 1981, Alhaji Umar Farouk Aliu Mahama belongs to a prominent political family as the son of H.E Alhaji Aliu Mahama and H.E Hajia Ramatu Mahama( Former Second Lady of the Republic of Ghana, 2001-2009). His father was Ghana's first Muslim Vice-President and the first and only Dagomba to have risen to that political height. His paternal grandfather, Zongo Naa Mahama, was the Zongo Chief of Yendi, the traditional capital of Dagon.

Farouk Aliu Mahama's maternal grandfather, Alhaji Imoro Egala, was Ghana's Foreign Affairs Minister in the First Republic (1960-1961) and later Trade and Industries Minister. His maternal grandfather was the first black chairman of Ghana Cocoa Board and the founder of People's National Party, the mother party of People's National Convention (PNC).

He began his basic education at Sakasaka Experimental Presby, Tamale and was later enrolled in the Achimota School. He proceeded to Prempeh College in Kumasi for his secondary education and later to Kwame Nkrumah University of Science and Technology.

Later, Farouk earned his Bachelor of Science degree in Marketing at the Ghana Institute of Management and Public Administration (GIMPA). He now holds a Master's degree in Supply Chain Management from the Coventry University in England.