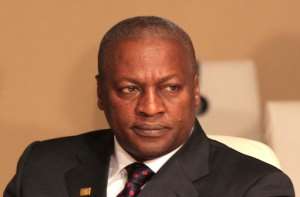 Former president and flagbearer of the opposition National Democratic Congress(NDC), John Dramani Mahama is scheduled to begin a two-day campaign tour of the newly created Savannah Region from Tuesday, August 27, 2019, to Wednesday, August 28, 2019.

The tour, according to the National Democratic Congress, forms part of preparations for the 2020 polls.

His planned visit had to be postponed thrice in a row over undisclosed circumstances. But it can now be confirmed that,the former president will be in the region at the above-scheduled dates after successful parliamentary primaries.

In a press statement copied to Ghanaweb's Ananpansah B Abraham, the Savannah Regional Secretary of the party, Salisu Biuwurbi noted that the visit will see the former president meet and interact with party executives, stakeholders and the grassroots of the umbrella family in the infant region.

The visit will take the flagbearer, who is seeking the thumbs of Ghanaians come 2020 general election to the Savannah Regional Capital, Damongo and other parts of the West Gonja District; Sawla-Tuna-Kalba District, North Gonja District, Central Gonja District, and the Bole/Bamboi District.

At Damongo, he is expected to pay a courtesy call on the Overlord of the Gonja Kingdom, Yagbonwura Tutumba Boresa I, at the Jakpa Palace and afterwards, hold a mini-rally of party members at the Damongo Lorry Station where he will inaugurate various Regional Committees of the party.

He will move to a site handed over to the party by the Damongo MP to cut sod for the construction of an ultra-modern Regional party office before proceeding to Laribanga.

Among other things, the former number one gentleman of the land will make stops to interact with the chiefs and people of Daboya and Lingbinshi in the North Gonja District, Gbiniyiri and Gindabuou in the Sawla-Tuna-Kalba District and Mandari in the Bole/Bamboi District.

He is to be accompanied by bigwigs of the party such as the embattled National Chairman; Mr. Samuel Ofosu Ampofo, the General Secretary; Mr.Johnson Asiedu Nketiah inter alia.

The former president was elected the flagbearer of the opposition NDC after he polled a landslide victory over six other candidates in the parliamentary primaries held months ago.