Money, power and prestige - what is really driving Mahama? 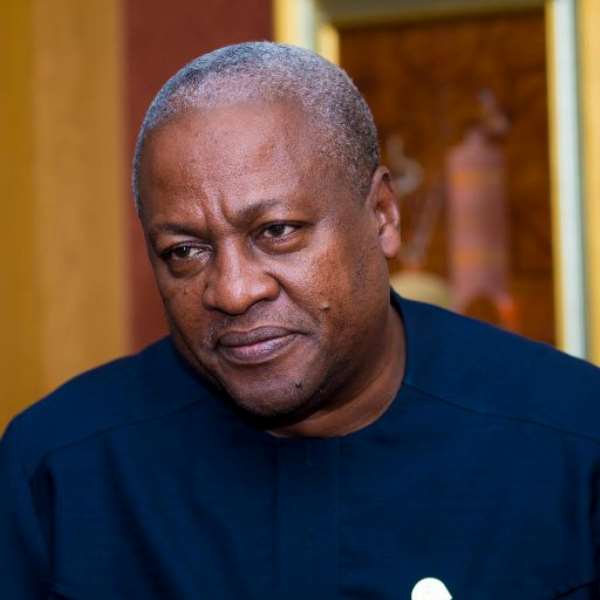 There has never been the like of it in Ghana’s history – a politician voted out of power and then voted back in again. The only comeback in our history is Rawlings’ second coming. But that does not count. He forced himself on us in the first instance!

Many of us were taken aback by the crushing victory of Mahama over his opponents at the NDC primaries. We wondered what was happening with the opposition party. Didn’t they know Mahama was damaged goods? But it rather seems there’s something that those who voted for him know that we don’t know.

What is driving Mahama? Some of his opponents say he wants to come back to continue the corruption from which he gained personally. Can that be true? This sounds naïve. He is not poor and he can enjoy his generous benefits as long as he lives. He does not need to become President again to survive financially.

Then why does he still want it so much? Is it a personal thing – to prove for the history books that he can be a great president? He’s had a bit more than five years to do that. Is he being driven by a desire to exact retribution on his opponents? Is it that others have put pressure on him to stand again and he could not withstand that pressure? Does he know something that happened in his 2016 loss that he can fix and get back the job? He has hinted at something that went wrong technically with the voting process of the elections that he lost. Or did he realise that the party does not really have anybody as electable as he is?

There is a human hunger for power that underlies all forms of political behaviour. Many people who seek high political office want the power that office gives. Out of the power comes prestige. Political power is also profitable financially, especially in third world countries. Those who already have wealth may seek the presidency for the power that their money cannot give them. Sometimes, the moneyed see persons with far less wealth and intelligence than them wield more influence and power as political office holders. There is a complex relationship between money, power and prestige. Which combination of this is driving Mahama?

Politics is the only work Mahama has known. He has been in it all his life. As a child he saw his father in politics in the Nkrumah era and grew up in a home full of political activities. Whenever there is political stability for a long time, some people are bound to make politics their life-long occupation. When they lose office they try to get it back if they can. Mahama is not the only one bitten by this political bug. Akufo-Addo too has been in politics all his life having grown up in a home of politicians. Kufuor also entered politics at an early age (he was a junior minster at 29 in Busia’s government) and played it all his life. Both persistently sought the highest office of the land. Given this tendency of some human beings to cling on to politics, Mahama’s quest should not be surprising.

His margin of victory at his party’s primaries was big. Why did his party vote for him? Some say he had more money than the competition and used this to bribe the electors. Others say the party hierarchy may have decided that he is the best known face in the party and the one likely to bring victory. Still others say those party members who voted for him are indebted to him in various ways. They need him back in power to enable them settle these debts. They are the people who stand to regain their former positions of favour if he comes back to power.

Will voting back Mahama be a return to the old ways? This needs not be so. One thing which may be driving him is the realisation of the mistakes he made in his first term – mistakes that he will be at pains not to repeat. If the desire to leave a favourable name in our history is strong in him, he will not proceed as before. If he is voted back, he will be a lame duck president from day one since he would not seek another term after that. This can give him the guts to take some good but unpalatable decisions that may do the country good. The opposite may be true too: because he would not seek another term, he may not care how well he does.

But what are his chances? There have been a few comebacks in other countries. The phenomenon is rare in African politics. Often, our leaders have tended to entrench themselves in power knowing they would not taste it again if they lose it. The frequent coups on the continent have meant that civilian politics has not had a long time to establish itself. The cabinet system of governance the British left us is designed to make leaders come back if they regain favour after losing power. But we discarded that system. When it was re-introduced in the Second Republic, it lasted for only 27 months under Busia. If Mahama succeeds, it will be the first of its kind on the continent.

The fact that Ghanaians still vote on tribal lines will do Mahama a favour. Members of his party and tribe and those who stand to gain, directly or indirectly, by his victory will vote for him as a matter of course. They will not be dissuaded by scares from his past. Another thing that favours Mahama is the apparent hopelessness of the present regime. This may be his biggest trump card yet especially on the corruption index. Many Ghanaians are becoming wiser. They know Mahama will not discontinue the good policies of the present government but will try to improve upon them. It is unlikely that the NPP, this time around, will find new grandiose promises to deceive the people. And there is no credible third alternative in Ghanaian politics.

Despite all these, Mahama faces a very daunting task. The incumbency factor is still strong in our politics. Incumbents have access to state institutions (and the state kitty?) which they can use to surreptitiously campaign. Ruling parties always have more money than the opposition parties.

Another obstacle in the way of Mahama is the fact that the present government has not really left its campaign mode. Everything it has done since it came to power is geared towards retaining that power. The government has put its people in all the sensitive positions including that of the chair of the EC. In countries with strong electoral systems, it does not matter who chairs the electoral board. But in a country like ours, the chair of the electoral board has enough power to decide electoral outcomes in close contests. The government has replaced many senior officers in the public and civil services with party appointees who will fight tooth and nail to maintain their positions.

The NPP has also seen the effectiveness of drawing blood to achieve its electoral goals. We saw this in the by-elections held since the last general election. Unless Mahama can counter with even more sanguinary violence, he will not succeed! Akufo-Addo is in the driving seat.

If Mahama fails next year, he will have a hard time convincing his party to put him up again in 2024. He may then devote his time to give us the second volume of his memoirs which he promised in the first volume – My First Coup d’État – Memories From the Lost Decades of Africa (Bloomsbury, 2012). Will the follow up be his second coup d’état?