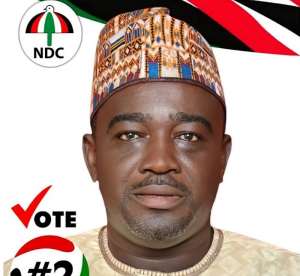 The defeated parliamentary aspirant for the Ayawaso East Constituency, Dr. Yakubu M. Azindow has congratulated Hon. Nasser Mahama Toure , on his resounding victory during the party’s primaries on Saturday.

Dr. Azindow who tried his hand on the seat for the first time said the delegates have decided and that there’s no need for enmity but unity within the ranks and files of the umbrella family.

He noted that both he and the incumbent are not enemies but comrades in the same party who have plans to develop, transform and empower the people of East Ayawaso and that they have the people at heart hence going into the contest.

The aspirant used the opportunity to aske supporters of both camps to forgive each other for the mistakes committed against one another and also correct the mistakes and make peace and think about the general good of the NDC.

‘’ We might have been at logger heads, wronged each other either knowingly or unknowingly due to the heats of our respective campaigns and it is time to forgive ourselves and move ahead as members of one family’’ he explained.

To that end, he commended the delegates for the peaceful manner in which they conducted themselves before, during and after the contest. The campaign and primaries period ,Dr. Azindow said are over and it is time to join forces and work together for the benefit of the chosen one [ Hon. Nasser Toure] and the NDC as a whole.

The political scientist reiterated his readiness to commit and dedicate himself to the course of the NDC party in the constituency and beyond until victory is assured for Hon. Toure and John Dramani Mahama in 2020.

The contest has helped make me stronger, committed, dedicated and more determined to serve the people both at the constituency and national levels. I have learnt and understand a lot of the challenges bedeviling our people during the campaigns and interactions with them, either individually or in groups.

He also thanked his followers for their dedication and support during his campaign and electioneering process and further called on them to support courses of both hon. Nasser Toure and John Mahama for massive victory in 2020.

‘’ I want to thank you all for your commitment, love and dedication. The delegates of Ayawaso East have decided and I respect their decision. I want to sincerely thank all fellow comrades, supporters and campaign team members for your dedication’’ Dr. Azindow said.

Meanwhile a constituency executive of the NDC who spoke on condition of anonymity commended Dr. Azindow for his brevity to contest in the primaries. He said this has been the toughest parliamentary primaries in the annals of the constituency since it was separated from Ayawaso North.

He urged the American based politician to never give up and see his lost as sign of good things to come his way in his chosen political career. Dr. Azindow has great prospect and the future looks very bright for him but only with dedication and commitment.

He advised Dr. Azindow not to go to sleep but work harder to correct his mistakes and come back to fight another time.

Let us remain committed to the party and Hon. Nasser Toure as we move ahead into the 2020 general elections.