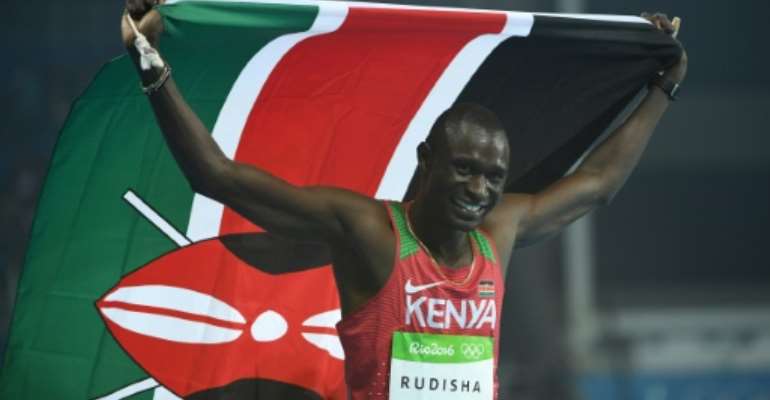 Kenya's David Rudisha, in a file image, celebrates his victory in the men's 800m final during the athletics event at the Rio 2016 Olympic Games at the Olympic Stadium in Rio de Janeiro. By Johannes EISELE (AFP/File)

Kenyan world 800m record holder David Rudisha escaped with minor injuries when his SUV crashed into a bus on Sunday after one of his tyres burst on the busy Nairobi-Kisumu highway.

Police said the two-time Olympic and world champion was driving to his home in Kilgoris in western Kenya when his car hit an oncoming bus after the blowout.

"Rudisha was rushed to the Keroka Sub County Hospital where the doctors revealed that the athlete had not suffered any fractures, and he has been allowed to go home and rest", said Keroka police chief Walter Abondo.

The 30-year-old Rudisha, who set the 800m world record of 1:40.91 at the London 2012 Olympics, has been out of competition for the last two years due to recurrent back and knee injuries.

He is reported to have started light training with a view of peaking for the 2020 Olympic Games in Tokyo.

Rudisha had previously sat out a full year of competition between 2013-14, but managed to make a comeback to successfully defend his Olympic 800m title in Rio de Janeiro in August 2016.

As the reigning world 800m champion, Rudisha has a wild card to defend his title in next month's World Athletics Championships in Doha, but he's unlikely to be ready to take part in the national trials in Nairobi on September 12-13.