Expelled nun in Kerala fights back 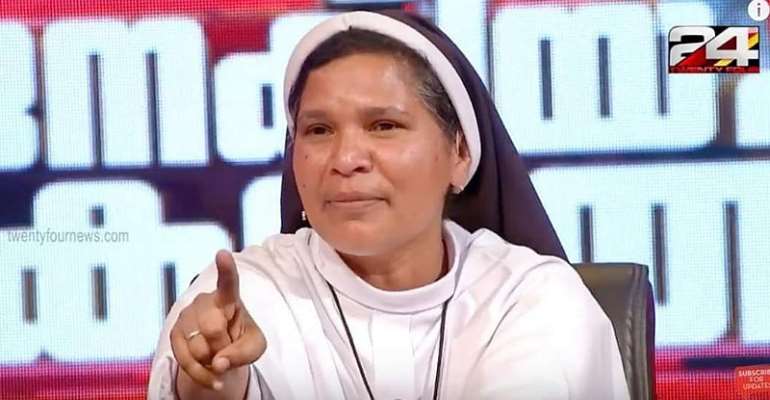 An Indian Catholic nun has challenged her dismissal from the Kerala-based congregation for 'violation of its norms'. Sister Lucy Kalappura says she is being punished for speaking out about sexual abuse in the Church.

The Franciscan Clarist Congregation (FCC) in the southern Indian state Kerala expelled Sister Lucy Kalappura from the congregation earlier this month for leading a life that was in their words, against the 'principles of religious life' and the rules of the congregation.

Some of her 'crimes' were learning to drive, owning a car and publishing a collection of poems.

Kalappura had been given the required canonical warnings but failed to show “needed remorse” and an explanation for her lifestyle in violation of the regulations of the congregation, said the letter signed by Sister Anne Joseph, superior general.

Participation in protests
"These reasons are just a lame excuse and a lie," Sister Lucy told RFI.

"The real reason is that I was the prominent face in the protests held in September 2018 by nuns demanding the arrest of rape-accused Bishop Franco Mulakkal.”

Mulakkal, a senior member of the Roman Catholic clergy and head of its Jalandhar diocese, was accused of raping a Catholic nun 13 times between 2014 and 2016.

He is currently out on bail as the case is being heard in court.

The case has caused a stir all over India. In Kerala, where Christians constitute 18 percent of the state's 35 million people, the case has special significance as the church plays an important role in pioneering educational and health care institutions.

“They (Church) have demanded that I fully repent and withdraw the case. That's not going to happen. They should apologize to me for disparaging me and for the way they have been torturing me and harassing,” said Sister Lucy.

Instead of complying, Sister Lucy filed a written complaint to the police earlier this week in which she alleged that she found herself locked inside the convent in the morning as she got ready to attend holy mass in the nearby church.

Based on her complaint, the police registered a case under punishment for wrongful confinement.

She further alleged that the FCC was using social media to defame her and tarnish her reputation.

A crisis of confidence in Kerala Church
Over the last two years, a spate of sex scandals has exposed the dark side of the clergy in Kerala. Despite growing calls for reform of the church, religious leaders continue to resist.

According to police, at least 12 priests in the state have been accused of committing sexual offenses.

"The church is facing a real crisis. Sexual exploitation and torture behind the church walls as well as malpractices are tumbling out and more dirt will surface," George Joseph, president of the Kerala Catholic Reforms Movement, told RFI.

Appeal to the Vatican
In an explosive autobiography, titled "Amen," Sister Jesme, a Catholic nun, who has left the order, has detailed how sexual abuse and exploitation were rife in the church and there were blatant attempts to brush them under the carpet.

"The case involving Bishop Mulakkal is the biggest and now it has reached a fast track court and the trial is going to begin very soon," Sister Jesme told RFI.

"Obviously, nuns are concerned by the developments.”

Standing firm on her decision not to leave FCC, Sister Lucy has filed an appeal before the Vatican to overrule the expulsion which she has termed as 'unjust' and said she will fight her dismissal in a civil court although she did not elaborate.

The FCC refused to comment on the case but said Sister Lucy would need to withdraw her police complaint against the local superior nun and issue an apology.

"We will not want to say anything else," said a FCC official.