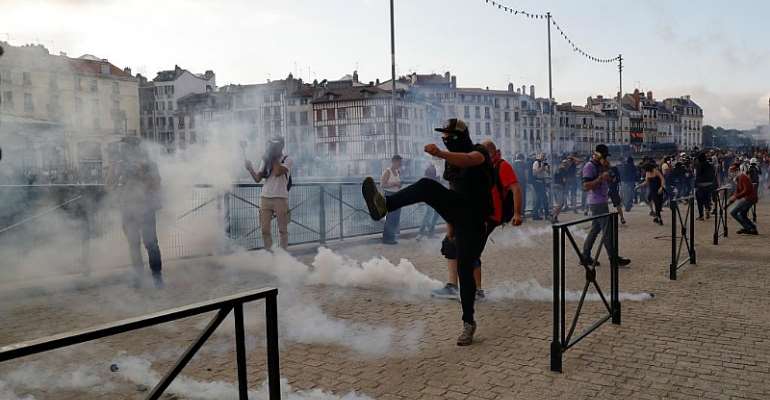 French police have used tear gas and water cannon to break up anti-G7 protesters in the southern city of Bayonne as leaders from the world's leading industrialised nations arrived for their summit just a few kilometres away in Biarritz on Saturday.

Since Monday, anti-capitalist activists, environmentalists and other anti-globalisation groups have been flocking to a counter-summit in southwestern France that organisers insisted would be peaceful.

More than 9,000 anti-G7 protesters took part in a large authorised march on Saturday, over a bridge linking coastal town of Hendaye in France to Irun in Spain that took place without incident.

But authorities remain on high alert, with Biarritz in lockdown and surrounding towns under high security alert.

"I want to call for calm and for unity," French President Emmanuel Macron said in an address to the nation just before the opening of the summit, where world leaders were to address the Amazon crisis along with other global issues.

However the atmosphere was more hostile in Bayonne, eight kilometres away from Biarritz, where around 300 hundred protesters chanting anti-capitalist slogans did not seem to follow a route, instead wandering the streets trying to find a way into the city centre.

The police, who were deployed en masse in the city, put up a barricade blocking their path.

The protesters tried to get through the barricade and police faced them down for more than an hour, according to AFP journalists.

The angry crowds were eventually dispersed in the evening after the police used tear gas and water cannon.

Dozens of arrests
The prefecture of Bayonne said that 68 people were arrested, 38 of them detained in custody overnight.

They face several charges ranging from participating in a group with the intention of committing acts of violence or vandalism, in possession of objects that could be used as weapons, covering their face or throwing objects.

Earlier, on Friday, 17 arrests were made near Hendaye as police clashed with some anti-G7 protesters who threw objects at police.

France has deployed more than 13,000 police and gendarmes to secure the G7 event amid fears of disturbances by radical anti-capitalist groups, anarchists or the yellow vest protesters.

They were charged with planning violence, sentenced to several months prison and banned from returning to France.

Another German national was arrested early Wednesday and deported, since French authorities had banned him over "violent actions" at a previous G20 meeting, legal sources told AFP.

In anticipation of trouble, France has set up a special magistrates' court, with 17 prosecutors and 70 lawyers on hand, as well as holding cells with capacity for 300 people for anyone caught breaking the law.