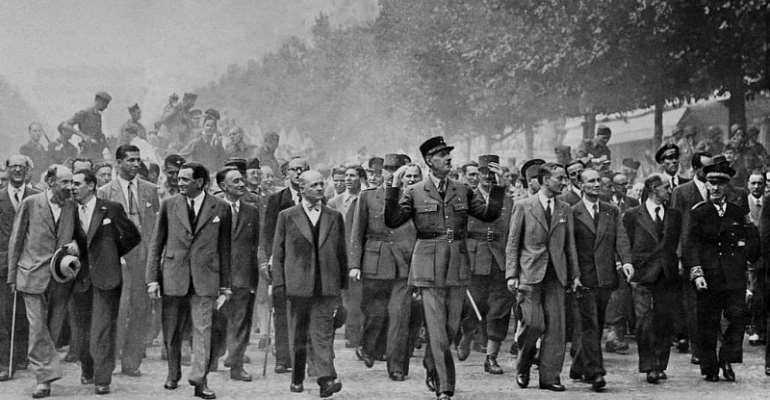 Thousands of people, including US war veterans, are expected to turn out in Paris on Sunday to mark 75 years since the city was liberated from German Nazi occupation, nine months before the end of World War Two.

These were the defiant words of General Charles de Gaulle spoken at his address given outside the city hall on 25 August 1944, a day engraved forever in France's collective memory.

The Liberation began a week earlier, on 18 August, when the communist chief of the French Forces of the Interior (FFI) Henri Rol-Tanguy, gave the order for a general uprising.

The faction behind de Gaulle issued the same call the following day.

A week of street clashes, followed by victory

Resistance fighters, supported by workers, women and even priests were later joined by French and US soldiers.

Parisians and soldiers alike were bouyed by the victorious liberation campaigns in Normandy two months before.

A column of military vehicles led by Major-General Philippe Leclerc, commander of the 2nd French Armored Division supported by the US 4th Infantry Division of Major-General Barton, began arriving in Paris on the evening of the 24 August.

Germany's commander in Paris, Lieutenant-General Dietrich von Choltitz, who was holed up in the Hotel Meurice, had been ordered to flatten the city as the Nazi's had done in Warsaw.

But the diplomatic intervention of the then Swedish ambassador Raoul Nordling caused Choltitz to ignore Hitler's orders.

This gave precious extra time to the Resistance to organise their defence.

On the French side, the death toll came to 1,000 Resistance fighters, 600 civilians and 156 French soldiers.

The Germans counted 3,200 dead.
It was another nine months before Germany finally surrendered, ending World War II in Europe in May 1945.

Liberty Parade and re-enactment
Each year for the last 75 years, it is the bravery and sacrifice of ordinary citizens as well as the military might which is celebrated in a range of events.

The Paris Fire Service will lead proceedings by hoisting France's flag on the Champs Elysées just as they did on the 25 August 1944 declaring the city free of Nazi occupation.

A re-enactment of the liberation of Paris complete with armoured cars and Parisians dressed in clothes from the 1940s will take the form of a 'Liberty March' from Porte d'Orleans to Denfert-Rochereau in the afternoon.

New Liberation Museum opens to the public
In the evening, the Paris City Hall will host writers and musicians to read and perform works from or about the war years. Both music and literature played important roles in the lives of Parisians during the occupation.

The new Museum of the Liberation site will be officially inaugurated as a grand finale to the day of commemorations.

The museum is home to over 7000 original documents, photographs and videos. A new feature of the museum is an underground bunker used by resistance fighters.