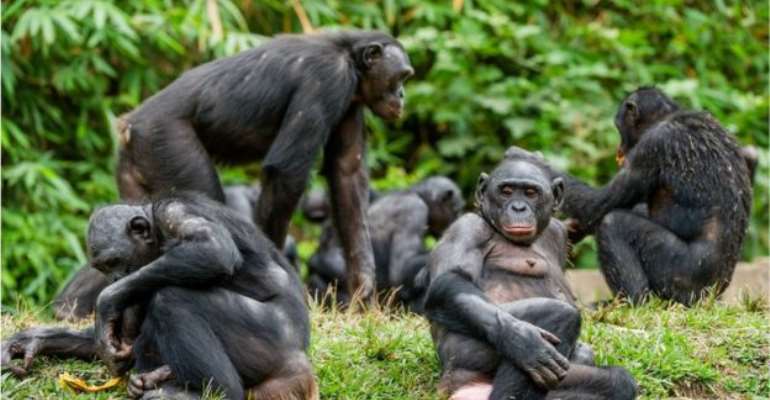 Why is that important?

AIDS has only existed since the beginning of the 80s. The first 5 cases were reported in 1981, cf.

According to the current zoonosis model (see references), the harmless SIV virus was passed on to humans by monkeys around 1930 in Africa (to then show up first in heavily classically infected, drug-addicted homosexual populations in San Francisco and New York as HI virus).

“Our phylogeographic approach establishes that SIV is ancient and at least 32,000 years old. Our conservative calibration point and analyses of gene sequence saturation and dating bias suggest it may be much older.”

There is no reason why the virus, when transmitted from monkeys to humans, should not have passed millennia ago. The common zoonosis theory remains silent on this (see references).

But then the AID Syndrome would have had to occur much earlier and not first around 1980 at the height of drug abuse and (nitride-)chemsex of homosexuals.

Both the SI virus in monkeys and the putative HI virus in humans are so-called slow virus (lentiviruses), i.e. the effect of an infection should show up after years to decades. There would have been time enough to infect large parts of the population until the symptoms of opportunistic infections become apparent. The spread of the virus cannot limit itself by a too rapid death of the host.

But we do not walk over mountains of dead monkeys in the jungle that have died of opportunistic infections following the collapse of their immune system.

On the missing animal model cf.

„One of the major limitations in searching for cures and vaccines for HIV-1 has been the lack of an animal model that recapitulates all of the salient features of HIV-1 infection in humans. HIV-1 is a direct descendant of SIVcpz, a virus that infects Central Africa chimpanzees (Pan troglodytes troglodytes) and might have a substantial impact on wild chimpanzee communities. Nevertheless, HIV-1 infection of chimpanzees in captivity rarely results in the development of disease.“

„The animal relative closest to humans, the chimpanzee, had been exploited extensively in AIDS research, but it was realized off late that even chimpanzees do not develop human AIDS-like symptoms.“

„Rhesus macaque/SIV model has not contributed much to the development and optimization of AR therapy, because of their unsuitability.“

“This analysis expands on previous data that underlined the poor performance of chimpanzees as models in HIV/AIDS research, evidenced by a large number of negative opinions and comments toward it and by the significant withdrawal of NIH funding for it.”

“Comparative studies of lentivirus infections in other species show that AIDS is not an inevitable outcome of infection because simian immunodeficiency virus in natural hosts seldom causes disease.”

The only known reservoir for HIV-1 and HIV-2 is humans. Chimpanzees can become infected with HIV-1, but they either do not get ill at all or only after very long incubation periods.”

In addition to the bystander cell enigma (see references), this is another big puzzle on the HIV=AIDS dogma.

How does science deal with this? We don't know, so we keep researching. But prudence is the better part of valor and we start the antiretroviral treatment with the most severe cell toxins right away (see also in the references).

The deadly virus from the jungle, which then shows up first in heavily classically infected homosexual drug addicts? People who survive only thanks to antiretroviral therapy (ART), e.g. thanks to AZT (zidovudine), a substance too toxic for short-term chemotherapy?

Well, in the first tests they only survived by blood transfusions, cf.

“The results of Concorde do not encourage the early use of zidovudine in symptom-free HIV-infected adults. They also call into question the uncritical use of CD4 cell counts as a surrogate endpoint for assessment of benefit from long-term antiretroviral therapy.”

“In all, 99 Imm and 38 Def participants stopped trial capsules because of adverse events. In only 16 Imm and 2 Def was haematological toxicity the main reason; in the rest it was predominantly gastrointestinal or neurological symptoms (headache) or malaise (table 6). One or more blood transfusions were received by 18 Imm and 11 Def while they were taking trial capsules.”

AZT is still on the WHO list of the essential medicines of humanity, cf.

So today one is smarter and uses lower doses. And look: those who are being treated are still dying, but now very slowly, as it should be for a slow virus.