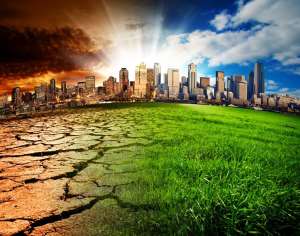 Many experts have identified Climate Change to be the most potent threat to the survival of our planet, earth. Rising sea levels, declining fish stocks, changing weather patterns, increasing flooding and increasing global temperature have been identified as some of the catastrophic consequences of climate change which – if not urgently addressed – will still reach an irreversible stage.

Sadly, human activities have been identified to be a major contributor to this problem. Scientists believed that much of the problem is caused by greenhouse gases that are warming the earth with human activities being 95% probable causes of these gases. This is according to the Intergovernmental Panel on Climate Change (IPCC).

Indeed, the United Nations (UN) considers climate change to be “The defining issue of our time” and has therefore been leading efforts to combat it. Through its legal instruments - United Nations Framework Convention on Climate Change (UNFCCC), The Kyoto Protocol and the landmark Paris Agreement, the UN has provided the needed leadership in this crucial battle for survival.

However, efforts by the UN needs to be complimented by all and sundry. There is abundant irrefutable proof of the consequences of climate change, consequences that are affecting every part of the world, without any exception.

The fight against climate change is challenged by the inactions of those who consider these consequences to be a myth and overrated. Such people resist every measure that is being put in place to address the problem.

Also, another group of people whose inactions are an obstacle to the climate action agenda are those who are convinced of the consequences of climate change but are not interested in taking meaningful actions to combat it. Though these people do not resist internationally agreed climate action protocols, their efforts towards the implementation of those protocols needs to greatly improve. It is important to note that, all the people described above are bound by a common interest – they prioritize economic growth and profits, even if it is to the detriment of the environment.

In addition the actions and inactions of some major corporations is another factor that is hindering the fight against climate change. These corporations need to take a critical look the consequences of their environmentally unfriendly business practices.

Indeed, according to a CDP Carbon Major Report, only 100 companies have been responsible for 70% of the world’s greenhouse gas emissions since 1988. Therefore, if these companies were to become environmentally friendly, that would have been a major boost to the climate action agenda. Archbishop Emeritus Desmond Tutu was therefore right when he said: “People of conscience need to break their ties with corporations financing the injustice of climate change.”Ironically, these leaders and corporations claim to be building sustainable economies for future generations whilst at the same time ignoring the dangers of climate change which is a significant threat to the sustainability of this planet.

Ironically, we claim to be building sustainable economies for future generations whilst at the same time ignoring the dangers of climate change which is a significant threat to the sustainability of this planet.

It is high time we all realize that, the threat of climate change is real. Though according to climate scientists, there is still time for the world to act, if all hands are not on deck towards the preservation of this planet, the future generation will not have a home to enjoy the economies that countries are busy building.

The problem of climate change must be everyone’s business, everyone needs to survive, and so must everyone take a climate action for the sake of his or her survival.

Let the voice of Ban Ki-Moon, a former UN Secretary-General, be echoed through every ear of conscience, when he opined, “Climate change does not respect border; it does not respect who you are – rich and poor, small and big. Therefore, this is what we call ‘global challenges’ which require global solidarity.”