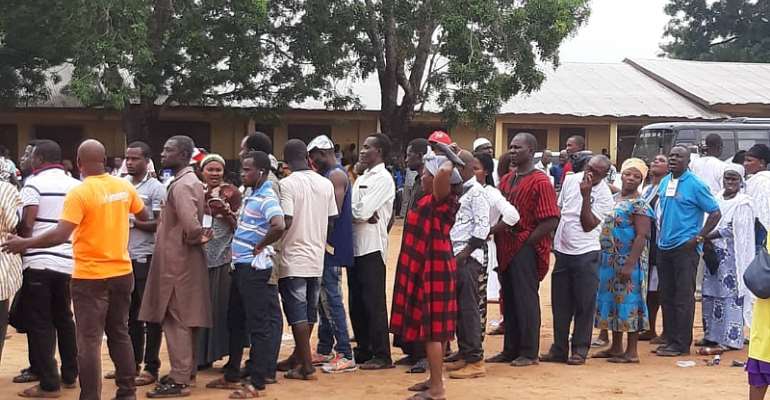 A total of 1,230 delegates are expected to cast their votes in the Amasaman constituency in the National Democratic Congress’ (NDC) ongoing parliamentary primaries.

Most of the delegates defied early morning rains to arrive and showed up to cast their ballots.

Citi News’ Pius Amihere reported that the process has been smooth as adequate security personnel have been deployed to the center to maintain law and order but said intermittent rains led to brief confusion at the centre.

Five aspirants are seeking to unseat the incumbent Member of Parliament, Emmanuel Nii Okai Laryea who has been the MP for two consecutive terms since the constituency was created in 2012. The other five are;

Delegates are trooping in in their numbers to participate in the exercise.

The elections are being held in some 157 constituencies. In 39 constituencies, incumbent MPs and other aspirants are going unopposed.

The primaries have been suspended in some five constituencies including Asawase and Ellembelle, whilst the party is yet to open nominations in 74 constituencies. No phones near voting booths – NDC warns agents ahead of primaries

Meanwhile, agents of the various parliamentary aspirants are not being allowed to carry phones near booths at the centres during the primaries.

The centres are also supposed to be campaign free zones, the party's General Secretary, Johnson Asiedu Nketia had warned.

“It is prohibited for you to be canvasing for votes. No pictures or an effigy or parliamentary aspirants shall be allowed within 500 metres of the voting centre. So don't approach the voting centre in the T-shirt of your favoured aspirant.”